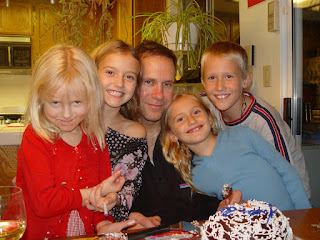 I, no we, my wife and I, have four amazing kids. No, seriously, they are. I couldn't possibly be biased, but I'll let you judge:

Marlon, the oldest, (not their real names) recently graduated as an officer from one of the service academies where he was a collegiate swimmer, and is now in training with a special forces unit. He was offered a pilot training slot but turned it down to go into special forces (a subject for a future post).

Bronwyn has recently returned from a two year dance school in Canada and is embarking upon her career as a professional modern/jazz dancer. Genevieve, my third, is also a cadet at a US service academy and in her sophomore year studying operations research, while Poppet, my youngest, is a high school senior sorting out her options. She is finding out that being a National Merit Scholar semifinalist means a mailbox full of Ivy League promotions on a daily basis.

So they're awesome kids, and what's more is they're really nice people, which in my book counts for more than their accomplishments.

But I am not going to be shy about taking at least some of the credit here because my wife, their mother, abandoned the family. At least weekly. Oh, she would always eventually come home only to fly out the door in a week or so leaving me alone with an infant and three toddlers for days on end.

She's not a bad person either, but she is an airline pilot. Part of her job description is to be gone. And she wasn't only gone for her three to four trips a month, but for many weeks of time every time her airline decided to send her to train on a new aircraft.

I've Got the T-Shirt

Short of actually giving birth to these children, there wasn't a single child rearing function that I was not required to master. They're 15,16 and 19 months apart so for a short while we had four in diapers. Did you know that a running clothes dryer can calm a crying baby in seconds? No, not in it, but rather on it where the changing table was. And I bet you didn't know that a bungee cord stretched from a bedroom door across the hall to the bathroom door is an excellent means to corral a toddler who won't stay in bed.

When giving baths, be sure to buy the cheapest conditioner available and then use about half the bottle per child per bath to ease the brushing of hair tangles. Learning how to apply drywall texture can also be a useful skill you will need to repair downstairs water damage from bath time. And doubling the recipe for hamburger helper, otherwise known as "Daddy goulash", leaves enough food to put in their thermos for a tasty and nutritious school lunch the next day!

Now I know that many of the stay at home dads and all of the moms reading this are thinking "So what? You're not doing anything that I haven't done." And you would be right. But to give credit where due, remember no one applauds the dancing bear for dancing well, but rather for being able to dance at all! The kids turned out OK, so I figure we must've done something right. What exactly that was, I have no idea, but there are a few clues. Here are my best guesses.

For full disclosure, I am also an airline pilot. My wife, Sandy, and I were both Air Force pilots which is where we met. Sandy flew transport aircraft in Desert Storm and left the military shortly afterward to start her airline career. She has flown numerous aircraft over a 20+ year career to include the 747 and is currently flying the 777 on international routes.

I have also been flying commercially for about 26 years, but after leaving active duty, I found a job in the Air Force Reserve. As a "weekend warrior", I flew the C-5 jumbo transport concurrently with my airline job until retiring from the military in 2002.

The nature of being an airline pilot (or flight attendant) means that you can't bring work home. Once you park the jet and set the brake, you're free. This means that while you are home, you are one hundred percent home. There are no business calls to take, emails to answer or projects due on Monday.

Over the years, I've met quite a few "industry couples" trying to raise a family. The entry of women into the piloting ranks as well as men into the flight attendant ranks means that more "assortative mating" is occurring. This is a fancy way of saying that there are more pilot-pilot couples and flight attendant-flight attendant couples.

Each couple has to decide for themselves how they are going to structure their family life. Sometimes this involves one person giving up their career to be a full time parent while the other becomes the sole breadwinner. Where both parents keep working, as we did, an important decision has to be made. Will they both be gone at the same time or will they fly opposite schedules?

Both of these options have their advantages and disadvantages. We tried both and then settled on flying opposite schedules. We figure that after almost 30 years of marriage, we probably have maybe 10 years of time actually spent together. (We may have accidentally stumbled on another secret of a long and happy marriage!)

As far as the couples who choose to be away at the same time, both parents being away simultaneously can be made much easier with the help of a grandparent or other adult family member willing to help out. Many couples make these sorts of arrangements.

Who's This Person with Our Children?

For others who wish to fly the same schedule, but without the benefit nearby family, hiring a nanny is required. This is how we started. We found a lovely older woman through an agency and made arrangements for her to live in while we were both away. When Barb, our nanny, started, we had two children aged 7 and 22 months.

We quickly found out that we were profoundly uncomfortable with the arrangement. Barb was loving and warm, but we simply realized that we just didn't know her that well. I think we both came to this conclusion one night when talking on the phone while we were both on a trip. Sandy was in Medford, Oregon and I was in perhaps St Louis. We never had any reason to believe that Barb wouldn't take good care of our children, but we still wondered whether she would get up in the night to comfort a crying baby. And that was that.

We learned that we were expecting again soon afterwards. Two babies later and after Sandy returned to work, we started flying opposite schedules and haven't looked back. It's not quite as harsh as it sounds though. We'd typically fly perhaps three trips passing in the night and then enjoy a week off together. Airline schedules can be flexible and we had the ability to occasionally give away trips for some time off.

So we ended up raising our kids as serial single parents. I can't be certain, but I think the kids learned some independence from this arrangement. Each of us had our own parenting style to which the kids had to adapt. But unlike real single parents, the parent who happened to be home at the time was, as I mentioned, completely available and involved. In a sense, the kids were the only full time residents in our house with Mom and Dad coming and going.

As the kids got older, they had to by necessity take more responsibility for their own activities. Telling Dad for instance that a form was due with a check for some activity did little good if when by the night before it was due, Dad was away and Mom was the parent on duty. I have little doubt as well that the kids used our part time status against us in ways we can only imagine.

As technology bridged the physical communications gap, keeping the travelling parent in touch with family life became much easier. In the days before cell phones we paid for our own personal "800" number which would ring at the house. Later on we used cell phones to call home, but now we mostly use video links such as Facetime or Skype. We would occasionally sit in on family meals and homework time as a disembodied head on the iPad, even from overseas.

We even took a stab at homeschooling for a few years after becoming disenchanted with our local schools. I could write pages on that experience alone, but I'll just say it was hectic, tiring and totally worth the effort. We eventually moved and put the kids back in public school.

One thing we never lost sight of in the chaos of a dual airline career was the importance of family priorities. We always had sit down dinners at a set time and tightly controlled TV time. I think that children need guardrails and routines. Even though my wife and I would run the house somewhat differently, the kids knew that our priorities were the same.

Being kids of airline employees, our children have become adept at navigating air travel and have travelled extensively by themselves, even to overseas destinations. When it came time to look for colleges, we told our kids that we were in for half the cost and that we'd buy a car for whoever got a free ride through scholarships. I may end up buying three cars.

So that's it. When we started this journey, we had no contact with other parents who had done this and we more or less made it up as we went along. It worked out but I think our key to success was to keep focused on the important things.