Aviation vs 5G Telecoms: Bring Popcorn for this Food Fight 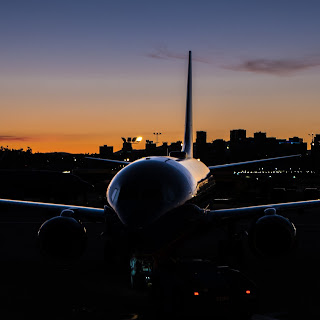 There has been a fair amount of ink spilt documenting the battle between the aviation and telecom industries over the issue of 5G deployment and the threat of electronic interference with aviation safety systems. There are literally billions of dollars of telecom investment lined up against the threat of massive disruptions in the national airspace system, the airlines, and cargo airline supply chains. Fronting for the telecom and airline industries are two old growth government alphabet agencies, the FCC and FAA respectively.

The FCC is an independent agency charged with regulating the nation's electronic spectrum. The FAA, organized under the Department of Transportation, regulates the nation's airspace and airlines. Also lined up in their respective corners are two industry trade groups, 5G Americas representing the telecom companies, and Airlines for America (A4A) representing the airlines. It is in this arena that this drama is being played.

At issue is whether newly implemented 5G transmissions will adversely affect radio altimeters on commercial aircraft. Radio altimeters use radio transmissions to determine precise aircraft altitude when an aircraft is close to the ground. They are much more accurate than classic barometric altimeters and are therefore used during low visibility approaches where precise measurement is needed. A number of other systems including thrust reversers, terrain avoidance systems, and windshear avoidance systems use the data from the radio altimeters to function properly. The loss, therefore, of the radio altimeter will invalidate all low visibility approaches which in effect takes us back to the 1970s for landing in fog, snow, or rain.

The electronic details are mundane. 5G transmissions are in the C-band spectrum which is adjacent to that which radio altimeters use. The fear is that the high power 5G transmissions will bleed over and disrupt the altimeters. Partisans who point out that the Europeans and others haven't experienced any 5G interference issues neglect to note that the European C-band deployment is different than US C-band, and has a larger frequency buffer. The question remains though of how much interference actually exists and whether safety would be potentially compromised by 5G interference.

Airline passengers should rest easy. The FAA, for all its faults, will not let airline safety be compromised. Yes, I hear you laughing after the 737 MAX debacle, but consider that the aircraft certification and operations branches are effectively separate organizations. But also, as a result of that incident, the FAA is now hyper-sensitive to any perceived laxity towards safety. The operations side is obsessively conservative and has already issued multiple airworthiness directives forbidding the use of any low visibility approaches requiring the use of the radio altimeter in the presence of 5G towers. One might even surmise that the new directives are overly conservative in order to compel diversions which would bolster the political case the FAA is attempting to make.

How Did We Get Here?

Cock-ups of this magnitude, pitting US industrial sectors along with their regulatory watchdogs against one another, are rare. The FAA has published a timeline of events from their perspective stating that the alarm had been sounded multiple times dating back to 2015. For their part, 5G Americas, in a white paper, states that a working group studying the issue took these concerns into account and yet did not reach any consensus and therefore did not submit any technical reports nor recommendations to the FCC. My personal guess is that even if the senior leaders in either the FCC or the telecoms had even been briefed about a potential problem, which seems unlikely, the thought of billions of dollars of revenue from spectrum sales or 5G deployment easily diverted their attention.

At this point the lines have been drawn and each side is playing for keeps. The telecoms are unlikely to back down from their 5G deployment after spending billions for the spectrum, hardware, and marketing costs. The AT&T girl doesn't work for free after all. The telecoms claim that the aviation sector botched their chance at any input and are now whining after the fact.

The aviation sector will of course roll out the safety card. They will also try to make the case that it is the telecoms who are the interlopers in an already stable and established system. And as day follows night, this entire fight will likely end up revolving around money. This is where it gets interesting.

One need only take a peek at the market caps of the telecoms versus the airlines to see where the 800 pound gorillas reside. The combined market caps of AT&T, Verizon, and T-Mobile, the big players in this episode, come to about $549B. The big four airlines (AA, UA, DL, SW) tote up to a whopping $75B. UPS and FedEx add another $244B but only a fraction of their operations are impacted. My guess is that the telecoms are better positioned to make more "friends" in the administration and Congress.

The current administration would love nothing better than for this mess to go away as both of the agencies in question belong to the executive branch. It is just not a good look; though each party will waste no time in blaming the other for the mess.

Pay the Man and Move On

The denouement of this melodrama will undoubtedly consist of part engineering solutions, such as adjusting the power output or orientation of the 5G towers. However, it may well include more costly fixes such as replacing current radar altimeters with updated models employing filtering to reject 5G interference. The airlines will likely attempt, and fail, to get the telecoms to pay for these upgrades. In any event, the entertainment will be worth the price of admission.

Captain Rob Graves is a veteran airline pilot and retired Air Force officer. He currently flies a Boeing 737 for a major American airline where he has over 30 years of experience. His Air Force career included instructing future USAF pilots in the T-37 primary jet trainer, aerial refueling in the KC-135 Stratotanker, and conducting worldwide logistics in the C-5 Galaxy cargo aircraft. He is the author of This is Your Captain Speaking, an aviation blog. It can be found at robertgraves.com.

Posted by The Captain at 4:39 PM No comments: