How the Airlines Infuriate their Customers...By Giving Them What They Want 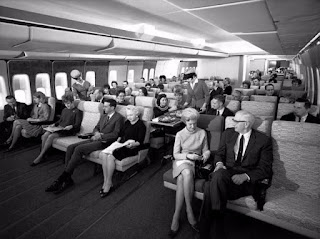 In the genre of travel writing, bashing the airlines has always been a no lose proposition. Mirroring critiques on the decline of civility and a decaying culture in general, the sorry state of air travel makes for an eye catching lede in the Sunday travel section. A vintage photo of cosmopolitan passengers in a spacious cabin being served confit on fine china used in comparison to today's experience of TSA body cavity searches and knee-chewing seat pitch is de rigeur for this type of exposé.

And they're not wrong. There is little doubt that flying today has become nasty and brutish, especially when compared to the experience of decades gone by. But the part that these articles invariably leave out is that flying is the way it is today because that's exactly the way we want it.

You heard me correctly. We, meaning you and I and the rest of the travelling public, are getting exactly what we want and, more importantly, at the price we want it. Let me explain.

In those pictures of yore, it appears as if the entire cabin was travelling in first class luxury. Given the prices that an airline ticket cost in those days, they in effect were travelling first class. Before deregulation, flying on an airliner was something that only society's elite could engage in with any regularity. No one other than the wealthy would have even considered flying to Chicago for a weekend to see a Bears game and then back to Omaha.

Now, of course, that option is open to nearly anyone. I know this because I regularly sit next to sports fans returning from a game somewhere. I always root for the away team because the only thing worse than sitting next to a drunk fan is sitting next to one whose team has just lost.

In order to understand where the industry is today, a brief history of  the airline business since airline deregulation may be helpful.

The Economics of Air Travel

Air travel in the US was deregulated back in 1978 with Jimmy Carter's signing of the Airline Deregulation Act. Since that time there has been a precipitous drop in air fares accompanied by an explosion in the number of passengers carried. The industry was democratized.

There have also been dozens of airline startups, bankruptcies, mergers, reorganizations, and failures. For a time, economists doubted whether it was possible for the airline industry to ever stabilize. This is because the economics of an airline seat resemble that of over ripe bananas or stale bread at the supermarket.

An airline seat, like day old bread, is what economists call a perishable commodity. That is, its value diminishes as it sits unsold. This is why supermarkets heavily discount their old bread. It is better to get some revenue from the bread than to have to throw it out. They might even sell it below cost as that revenue is better than zero revenue from thrown away bread.

An airline seat is the ultimate perishable commodity as its revenue value drops to zero the second the airplane leaves the gate. The marginal cost of producing these seats is next to zero, so airlines have every incentive to discount their unsold seats. This had the effect of creating price wars between airlines to clear their extra inventory. It also left the industry billions of dollars in debt.

In the wake of deregulation, the market was flooded with low cost carriers who could cherry pick the most price sensitive customers from the traditional legacy airlines. With their low costs, they could remain profitable while undercutting the legacies. Airlines like Southwest, People's Express, PSA, and America West made up the new vanguard of the low cost carriers (LCCs).

The legacy airlines found that they were unable to compete on price even though they continued to offer full service such as meals and assigned seats to their customers. They then attempted a competitive response by starting their own low cost subsidiaries such as United's Ted, Delta's Song, and Continental Lite though these efforts bore little fruit and were eventually abandoned.

Part of the problem was that the legacy airlines were hamstrung by their relatively generous union contracts. They could never get their costs down to the level of the LCCs. Their answer to this puzzle was to exploit a hole in their union contracts allowing the outsourcing of airplanes with less than 100 seats.

The establishment of regional airlines predated deregulation, but as the legacy airlines looked for a way to compete with the LCCs, this model was expanded dramatically. Regional airlines, flying under the brand and colors of their mainline partners, utilized new fast and long range jets to offer service to many smaller and midsize cities that their mainline partners then abandoned.

As they were separate corporate entities, regionals were not restricted by the union work rules and pay rates that covered the legacy airlines. Annual pay for regional jet pilots for example was routinely under $20k, but in the wake of 9/11, the choice was to take that pay or leave the industry. Regional airline flying eventually came to dominate domestic airline flying eventually accounting for well over half of all US departures.

Industry Consolidation and the Big Four

As the 2000s came to a close, a wave of long sought after mergers among the legacy airlines left only three: United, Delta, and American. All three had declared bankruptcy in the wake of 9/11 and had drastically reduced their costs. Joined by Southwest, whose costs slowly crept up to match the slimmed down legacy airlines, the new "Big Four" now controlled over 80% of US domestic airline flying.

With only four large airlines left standing, there has been some measure of stability introduced. By engaging in "capacity discipline", the big four have voluntarily restricted their growth thereby allowing fares to rise and, for the first time since deregulation, to become consistently profitable. Low fuel prices have also helped the big four to return sizable results to shareholders.

This would end our story except for the introduction of new ultra low cost carriers (ULCCs) and the quest to get to the top of the search engine price stack. As it turns out, the one thing that airline marketers have learned over the years is that the only reliable way to sell airline tickets is through pricing. This was the reason for the creation of the original band of LCCs, the regional airline response, and now the ultra low cost carriers.

This new model for air transportation embodied in carriers like Frontier, Allegiant, and Spirit, is to take the no frills LCC model to an extreme. These airlines have "unbundled" and added a price tag, to every possible service item to include assigned seats, overhead bin space, and even speaking with an agent. Their basic stripped down fare, which almost no one pays, then gets listed at the top of an internet fare search.

Spirit is universally reviled as having one of the least pleasant airline experiences possible. Their seat pitch is a knee capping 28 inches while their 73% on time arrival rate and second highest number of complaints for 2016 (beating out Frontier) puts them at or near the bottom of airline rankings.

But there is one thing about Spirit that you may not know. They are growing. Fast. For the past several years Spirit has returned margins of at least 15% while increasing capacity 15% to 20% annually. Their low rankings and poor customer treatment don't seem to affect the popularity of this airline with the flying public.

Giving the Customer What they Want

These ULCCs are growing so fast that they now have the attention of the big four. This time, though, the legacies aren't waiting to see how the story ends. Knowing that the airline at the top of the internet search is the airline that gets the sale, three of the big four airlines have introduced a new product to compete with the low price competition. Enter "basic economy" class or what some might call "economy minus".

All three airlines are calling their product Basic Economy, and they have features such as non-changeable and non-refundable fares along with other restrictions. American airlines recently came under fire in the travel press for announcing that they will reduce the pitch on their new 737s from 31 to 29 inches, but only for some rows, not the whole airplane.

It is easy to see what is happening here. These airlines are carving out sections of their existing airplanes for the basic economy product, but the real contest is on the internet in the fight to get to the top of the price rankings where sales are made. Southwest, one of the original LCCs, is sticking to its guns believing that free bag checking and customer service will carry the day. Time will tell, but if it works for them, they'll be the unicorn in an industry where pricing has always been king.

Airlines have learned the hard way, taught by their customers, that while everyone says they love roomy cabins and inflight meals, no one wants to pay for them. Those few who do can still get those things by flying first or business class.

This "revealed preference" for the lowest fares has driven the industry to provide their customers exactly what, through their purchasing behavior, they say they want. We have indeed met the enemy--and he is us.