The Lost Christmas Trees of the Strategic Air Command 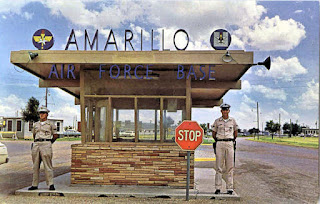 The Strategic Air Command (SAC) was a major command within the US Air Force from its inception in the aftermath of World War II until it was disbanded at the end of the Cold War. SAC was charged with conducting long range offensive air operations world wide. During the height of the Cold War, SAC consumed a large share of the Air Force budget in support of two of three legs of our nuclear response triad: bombers and intercontinental missiles. The Navy had responsibility for the third leg which consisted of nuclear missile armed submarines.

The manned bomber leg of the nuclear triad eventually came to be dominated by the Boeing B-52 Stratofortress. The B-52 was a large aircraft with a wingspan of about 185ft. With aerial refueling, these aircraft were intended to bomb targets in Russia after launching from their US and allied bases. Given the large fuel and armament loads, long runways had to be constructed to accommodate this intercontinental mission. These runways were often as long as 12,000 feet and as wide as 300 feet to accommodate the B-52's wingtip gear.

Dozens of these gargantuan runways were built in both the United States and some allied nations during the 50s and 60s. Accompanying these runways were parking spots for the bombers and their mated tankers to allow a quick takeoff in the case of incoming Russian missiles. These "alert" parking areas came to be known as "Christmas trees" due to the shape of parking aprons which empty out on to a central taxiway leading to the runway. Aircrews would spend up to a week living in a special dormitory known as an "alert facility", ready to launch their aircraft to fight WWIII on the several minutes notice of an incoming attack.

SAC was disbanded in 1992 at the termination of the cold war and many of the bases that hosted B-52s have been either closed or repurposed. Those Christmas Tree ramps and huge runways live on however. Some have been overtaken by weeds and others are now commercial airports. They can be readily seen from the air if you know where to look. Here are a few of my favorites though this is nowhere near an exhaustive list. 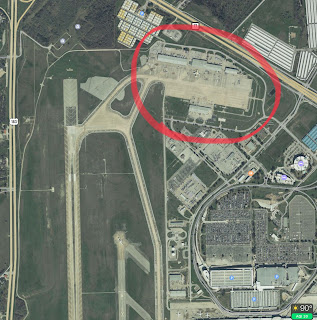 Bergstrom AFB was established in 1942 and ping ponged several times between SAC and the Tactical Air Command (TAC) during its life as an Air Force base. B-52s were stationed there in the early 60s until they were replaced by RF-4 reconnaissance aircraft. A pair of F-4s on approach into Bergstrom were famously captured in a music video by the Clash of their hit Rock the Casbah in the early 80s. The base was closed in 1993 and repurposed as Austin-Bergstrom International Airport. The alert parking aprons were incorporated into the cargo ramp and can still be seen. The airport it replaced, known as Austin Mueller Airport, was redeveloped into residential and commercial space, but the historic control tower still stands in that neighborhood. 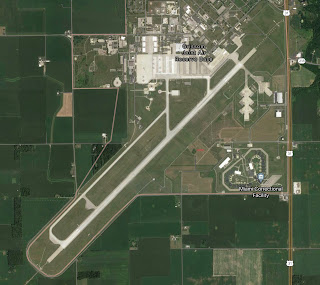 Grissom AFB started out in 1942 as a Navy base. The base was transferred to the Air Force in 1951 and reopened in 1954 as Bunker Hill AFB. While the base never hosted B-52s, it did host both B-47, B-58 and interceptor aircraft which would also have used the alert pads. In 1968 Bunker Hill was renamed Grissom AFB (three letter identifier GUS) in honor of Astronaut Gus Grissom who died in a Nasa space capsule fire. The base is now an Air Reserve base hosting KC-135 aircraft and several other reserve units. The runway is 12,500 ft long. 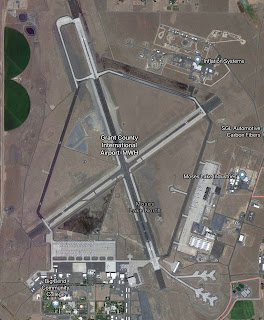 Larson AFB like many other bases was activated during the war as a training base. The close location to Boeing Aircraft Company in Seattle meant that Larson would see quite a bit of test aircraft operations. The XB-47 made its first flight from Moses Lake as did the YB-52. The base hosted B-52 and KC-135 operations from 1960 to 1966 when the base was closed. The main runway is 13,500 ft long. I also have some personal experience here as this is where I got my 737 type rating in a rented 737. This was before the time when type ratings could be attained with simulator time alone. After getting my bounces, our destination of SEA went below minimums and we ended up holding for an hour on my nickel. 737s rented for something like $25/minute if I recall. Expensive, but it all worked out in the end. 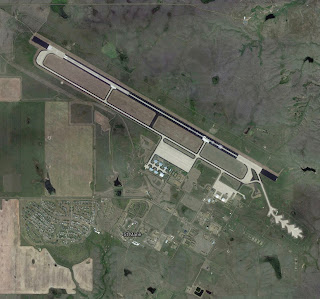 Many SAC bases were located in northern states as it reduced the flying distance to the Soviet Union. Known as "northern tier" bases, these were considered less than desirable assignments by many as the locations were isolated and the weather was cold. Glasgow was operational as a SAC base with their own assigned aircraft from 1960 through 1968. It was used for dispersed operations of aircraft from 1971 until the base closure in 1976. Since that time the runway and buildings have been left abandoned with occasional use by the Boeing Company for noise testing of airliners. 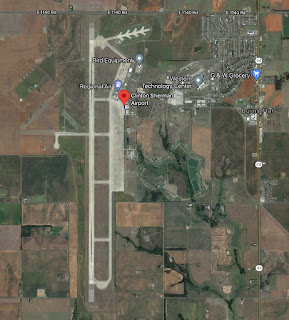 Clinton Sherman had its start in 1942 as a Navy base. After the war, it reverted to civilian use and was used to salvage and dispose of surplus military aircraft. Reactivated in 1954, the Air Force then went on to build a 13,500 ft runway for SAC operations. The base hosted B-52 and KC-135 operations from 1959 to the closure of the base in 1969. This base illustrates some of the problems with commercial redevelopment of old SAC bases. These bases were intentionally placed well away from cities and commercial areas for the reason that it was believed that in the event of nuclear war, they would attract missile attacks. When the bases closed, attempts were made to repurpose the facilities with limited success. 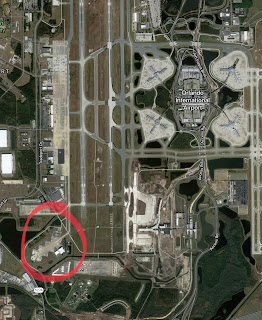 Anyone who's flown down to see the Mouse in Orlando may have wondered why they purchased a ticket to "MCO", the three letter identifier for Orlando International Airport and not something like "MOU" or "DIS". That's because before there was Orlando International, there was McCoy AFB. Named for Colonel Michael McCoy who was killed in an aircraft accident at the base, it was a front line SAC base from 1951 to its closure and conversion to civilian use in 1975. The primary SAC runway and alert ramps are still in existence. 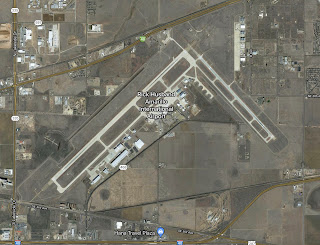 The airfield now known as the Rick Husband Amarillo International airport dates back to 1918 when two Army Signal Corps aircraft landed in a field near Amarillo. The airfield was a SAC base from 1959 to its closure in 1968. During that time it hosted both B-52 bombers and KC-135 tankers. Lore has it that it was President Lyndon Johnson who ordered the base closed after 16 panhandle counties voted Republican in his reelection contest. Also of personal interest to me is that Amarillo was the origin of the 909th Air Refueling Squadron. Now based in Okinawa, Japan, it was the squadron where I flew the KC-135 back in the 80s. The alert parking and long runway are still in existence. 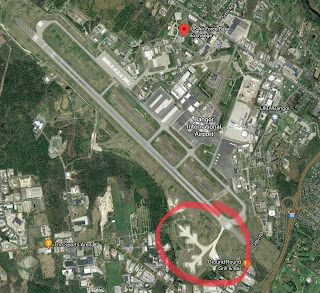 Dow AFB was established in 1947 and sold to the city of Bangor, Maine in 1968 to become Bangor International Airport. B-52s and KC-135 tankers were stationed there beginning in 1960. The base was closed in 1968 with reasons given as the maturation of the ICBM fleet which meant fewer bombers were needed as well as budgetary pressures from the Viet Nam war. The long runway and alert parking are still visible and in civilian use.

In the span of about 20 years from about 1950 to 1970, tens of millions of dollars were spent and hundreds of thousands of yards of concrete were poured to create amazing runways which in some cases were only in use for a decade or less. The era saw amazing aircraft such as the B-58 Hustler be designed, deployed, and retired in as little as a decade. It was a time of possibilities. Much of what was built is now gone except for the B-52s of course, and the weed covered Christmas Trees of the Strategic Air Command.

Posted by The Captain at 8:31 PM No comments: