Will Computers Learn to Fly Well Enough Before Pilots Forget How? 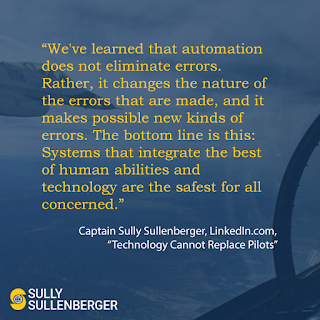 In my job, I get to fly with all different kinds of cats and dogs. And by cats and dogs, I don't mean the ubiquitous emotional support animals now being carried by passengers, but rather pilots. The guys and gals I fly with all have different backgrounds and stories. Over the years I've flown with pilots from every branch and sub-branch of the armed services, pilots with civilian-only backgrounds, and even pilots from foreign countries to include foreign military services. I even flew with a former submariner who managed to get out of a diesel stink boat and into an airplane.

No matter how diverse their backgrounds, we both get into the jet and within a few minutes it's like we've been flying together for years. That is the power of training to a common standard. We run checklists, make callouts, and fly the airplane in such a way that the other person knows exactly what to expect and when to expect it.

Over the years I've flown with some truly amazing pilots who could fly the machine like a virtuoso might play a finely tuned instrument. I've also flown with some, how shall we say, less precise pilots, who, while meeting standards, didn't go out of their way to make my or anyone else's eyes water at the sight of their aerial proficiency. This has usually been a case of lacking not skill, but rather the motivation for excellence. And I get it—it's nearly impossible to be always "on", but over time an average level of effort will be made apparent.

Automation, however, is changing things, and not unreservedly for the better in my opinion. Don't get me wrong; overall, automation is of great value in the cockpit and will be with us for the foreseeable future. The improvements to safety alone are real and well documented. There is, however, a fly or two in the automation ointment.

In today's highly automated aviation environment, it is becoming more difficult to tell who can fly the airplane well or not because we rarely do it. And when I use the term "fly" here, I mean to hand fly the aircraft without the use of the autopilot or automation. Hand flying, like any precise and complex human task, is a perishable skill. If you don't practice for a while, you'll get rusty. Any musician knows this.

Unfortunately, standard operating procedure at nearly every airline in the world to varying degrees is to employ automation to the maximum extent possible. So, if the automation flies as well as or better than a human (and it does, most of the time), what does it matter if pilots are losing their manual flying skills? To these hundreds of people I mention below, it mattered quite a bit. Consider the following.

A New Category of Crash

After any aviation accident, investigators will pour over the wreckage trying to figure out what went wrong. They will also look closely at the pilots' backgrounds, their training, and their proficiency. What is becoming apparent is the discovery of a disturbingly new type of crash where one of the primary causes is either the pilot's interaction with automated systems, or even worse, a pilot's lack of proficiency in recovering an aircraft from an upset or automation failure.

The crash landing of Emirates 521 in 2016 is an example of the first type of failure which I explored in detail here. The pilot expected the automation to perform in a certain manner, but due to circumstances which he had evidently not anticipated nor been trained for, the throttles were never advanced on a go-around. This caused the airplane to settle onto the runway after the gear had been retracted. The aircraft was destroyed in the post-crash fire while luckily, there was only one fatality.

The crashes of Asiana 214, a Boeing 777, Air France 447, an Airbus A330, and AirAsia 8501, an Airbus A320, are examples of a lack of proficiency in basic flying skills. I wrote about those tragedies here, here, and here. Collectively these crashes resulted in the deaths of 393 passengers and crew. The common link between these crashes is that all three airplanes were perfectly flyable when they went down. In each case, the pilots had profound misunderstandings about what was happening to their airplanes and were not equipped to remedy the situations.

How have we arrived at this juncture where (some) pilots are lacking in basic stick and rudder skills? The short answer is through years of charging into a technological future without taking the time to think about where we're going, nor planning how to get there.

We can all anticipate a time at some point in the distant future where automation and software are so far advanced that manual flying skills will be relegated to wealthy hobbyists who maintain and fly antique aircraft for fun. We're not there yet and won't be for some time. Even though the automation on today's airliners is quite sophisticated, it just isn't ready for prime time. I find myself having to intervene multiple times on nearly every flight to correct automation generated errors on the state of the art Boeing aircraft I fly. Heck, having the automation attempt to exceed structural limits of the aircraft isn't that uncommon. I suspect my Airbus, Embraer, and Canadair flying compatriots have similar experiences.

Another problem with automation as it is currently deployed finds the machine doing most of the flying while the humans sit on their hands waiting for it to make a mistake. No one seems to have considered that humans are uniquely unsuited to monitor machines, but rather it is the machine which should be assisting and monitoring the humans. Humans become quickly bored and will mentally check out after a short amount of time staring at a machine that may randomly make a mistake at any time.

As alluded to by Sully in the above quote, a better deployment of technology might be to keep the pilots in the control loop as an active participant, and to relegate the automation to the role of watchdog, which machines can do quite well.

As an aside, I am always amused that many sci-fi movies still depict some sort of manual control in futuristic spacecraft. It was Luke's manual flying skills obtained from bulls eyeing womp rats that carried the day in the original Star Wars movie. And while Sulu never had a side stick controller in the original Star Trek, one was added in later incarnations of that franchise. (Be sure not to miss the maiden voyage scene from the Star Trek spoof movie Galaxy Quest.) Perhaps they were onto something. There will always be a certain romanticism attached to the idea of the steely eyed flying ace hand flying the machine.

Back to Basics: The FAA Reacts

Alarmed by the recent spate of accidents attributed in part to the lack of pilot proficiency, the FAA recently created new rules for pilot training to address these deficiencies. Added in 2014, FAR 121.423 now mandates additional training for pilots which they call "Extended Envelope Training" (EET). This new training will now require pilots to demonstrate manually controlled proficiency in slow flight, loss of reliable airspeed, instrument departures and arrivals, upset recovery, and bounced landing recovery. Airlines were given a few years to upgrade their training programs and simulator capabilities to accommodate the new maneuvers.

Here's the sad part. All these maneuvers are Aviation 101, and are taught to beginning pilots. This actually reads like the syllabus I taught to pre-solo nuggets in the T-37 aircraft back in the 80s. What the FAA has inadvertently done is to validate the criticism that modern automated cockpits are causing pilots to become so rusty that they need to relearn basic airmanship.

Automation, while bringing many benefits and efficiencies to aviation, does have a downside. Over-reliance on automation has caused a gradual erosion in pilots' stick and rudder skills to such a degree that the safe operation of an aircraft can be jeopardized by automation failures. The FAA is now attempting a rear guard operation to restore basic skills to airmen whose acumen has been dulled by years of push-button flying.

There will eventually come a time when automation is robust enough and redundant enough to never need human intervention, but that time is still many years away. During this transition era, pilots will still need to maintain their skill set and be ready to assume control of the airplane with little or no warning. A smarter way to have humans and machines work together would see the machine deployed as an assistant to the humans who remain in direct control of the airplane, rather than the other way around.