Do You Feel Safer Now?

Lots of ink has been spilled on the issue of airline security since 9/11. So the question to ask is are airline passengers any safer after the untold billions of dollars which have been spent on security in the aftermath or have we all lost our collective minds? From the view through the peep hole in our new carbon/kevlar bulletproof doors, I'd have to say yes....and yes.

First the good news: There hasn't been a hijacking or bombing of a US airliner since 9/11 and maybe this is even due in some part to the creation of the TSA and its mind numbing bureaucracy. But we don't know if outside of Richard Reid, the terrorist who failed to light his shoe bomb, whether Al Queda has even tried to attack airliners since 9/11. And it must be noted that Reid was foiled by an on the ball flight attendant and not any security measures put in place by the government.

A large element of security is the perception that is given to the enemy by existing security measures. Perhaps by installing such a Byzantine, impenetrably dense (stupid, not thick) security system in US airports, we have successfully telegraphed to prospective terrorists that we are serious about security and that any attempt to breach it will fail. Perhaps, but unlikely. My feeling is that while jihadists the world over head to the terrorist superbowl in Iraq, few resources are left for planning new attacks on US soil.

As far as the actual effectiveness of our current security measures, one need only look to Israel, a country which is actually serious about airline security to find our measures wanting. For starters, US airports and airlines are simply too numerous to secure in any meaningful way. Airport screeners must be successful 100% of the time while the terrorist need only be successful once to cause a disaster. Secondly, in spite of the carnage committed by 19 young Arab men, political correctness still holds the day when it comes to any whiff of profiling, be it racial, national origin, or even using publicly available commercial databases for data mining. This is just insanity.

And lastly, the long lines in the terminals are in many ways a Potemkin village of security for public consumption. Inside the terminal, pilots are routinely frisked and patted down to prevent their carrying of any item which may assist them in gaining access to the cockpit when that is actually their job description. Outside the terminal, however, thousands of workers come and go through gate or door with only a key code or swipe of a magnetic card. Sure they're checked for criminal history when hired, but how difficult would it be to find a young jihadist without a criminal record to hire on as a baggage loader and toss his bag lunch (bomb) into the belly of the plane he is loading?

There, do you feel safer now?
Posted by The Captain at 2:45 AM No comments:


The airline sector is becoming more and more of a basket case every day. United, USAir, ATA and Hawaiian are in bankruptcy while American, Delta, and Northwest hover perilously close. And yet traffic levels have recovered fully from 9/11 and are on line to set records this summer. What gives? For starters, $55.00 fuel is not helping. From under $20 a barrel a year or so ago, these price increases have added millions of dollars of unplanned costs onto airlines.

So why don't the airlines just raise prices? They can't.

Airlines are suffering from a chronic overcapacity and inability to use mergers and acquisitions to rectify the problem. The announced merger of USAir and America West may solve some of this problem but the government largely exacerbates the problem by both propping up weak airlines and by making mergers very difficult.

So now the broke airlines without pension obligations and under court protection will bleed the remaining airlines. When will the sector get better? Anyone's guess but a few players will probably have to exit the scene before anything happens.
Posted by The Captain at 6:53 PM 1 comment: 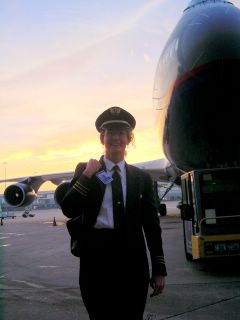 A friend of mine and a big jet.

Posted by The Captain at 6:51 PM No comments: