How to Fly with a Jerk 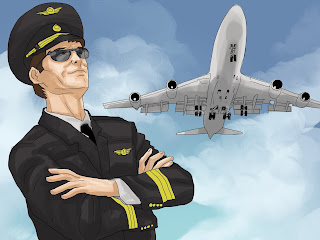 Yea, they're out there. The perfectionists, the disgruntled, the narcissists and especially the ones who are going to teach you the "proper" way to fly. Spend enough time in the front of an airliner and sooner or later you will be paired to fly with a jerk. Short of calling in sick, you will have to spend the next several days locked in a closet sized space for hours on end with the south side of a northbound horse.

So how will you cope? Remember that you have an important job to do and to do it well, you have to work with the other pilot. There was a time when the standard method of dealing with a jerk was to simply not deal with him or her. This could've meant each pilot scanning the 10 or 2 o'clock positions permanently while never interacting save for required checklist callouts.

That strategy clearly has drawbacks and can seriously degrade safety. There's a reason that airliners still have two pilots (for now). You're a professional even if the other guy or gal is less so, and the folks in back are counting on both pilots up front to conduct themselves as such. With all that in mind, here's the Captain's guide to surviving a pairing with a jerk! (Me included.)

Don't Keep It to Yourself

I think that most people are generally conflict averse. I know I am. Most of us don't go around looking for a fight or trying to cause trouble, especially on the job. We want to get through our day, finish with zero airspeed at the correct gate and go to the hotel. So when a situation crops up that causes us some consternation, a first reaction may be to just keep it to ourselves. After all we place a high value on good cockpit relations and rationalize that some internal discomfort is not too high a price to maintain a cordial cockpit atmosphere.

Don't fall for this rationalization. It is built on a fallacy. For starters, if the other guy is doing something that bothers you, he may not even realize it. Secondly, your discomfort won't go away. It will only fester and get worse. Trust me on this. And if you keep your feelings to yourself for any length of time, it can get really awkward when you finally do speak up. It is always best to get things off of your chest as early as possible.

Again, there may have been a time in the distant past where the Captain was omnipotent and not to be questioned no matter what he did, even if it fell outside of standard operating procedures (SOP). Those times are absolutely long gone. You have a legal and moral duty to make sure that the aircraft is always operated by the book. Does this mean that you must become a pecksniff and point out every deviation no matter how minor? No it does not; there is a middle ground between being a bag of sand in the seat and what we sometimes refer to as a "check F/O".

Getting back to the professionalism part, when the aircraft is operated in a non-standard fashion and something bad happens, claiming that the other guy was flying is of course no defense. My advice is to predetermine your own personal boundaries and then stick to them. You'll sleep better at night. If push comes to shove, which it hopefully never will, take the airplane if you must, and after landing grab your gear and get off the airplane. This will of course involve scheduling and chief pilots but your career is worth it.

And I want to add a note here about bringing in third parties to a dispute. I believe in handling conflict personally whenever possible. The outside resources available to you are your union's professional standards people and your chief pilot. The first thing either of these people will ask is whether you discussed the matter with the other person. If you reply in the negative, your credibility drops. Nobody will care about your issue more than you, so start there.

The pro standards folks and (most) chiefs are great, but my thoughts are that if the guy you're flying with is that big of a jerk, the pro standards folks are probably already well acquainted with him. Taking an issue to a chief pilot should be an absolute last resort. You don't want to be known as the guy who runs to management with a personality conflict. Gross or continued non-standard flying? Maybe. Just be ready to defend your actions.

Sometimes You Have to Just Suck it Up

I personally like to let my F/Os fly the airplane any way they'd like as long as it is within SOP, but that's just me. Some cappies like to dictate how the plane should be flown or how a system should be operated. According to most airlines' procedures and FARs, they are within their rights to have it done the way they want it done, again as long as it is within SOP.

As an F/O, you learn to become a chameleon and do it the way the boss likes it to be done. For instance, in the age old argument of whether or not to run the packs on high on a hot day in a 737, everyone has an opinion. But if the guy in the left seat has a preference, his vote is the one that counts. Hopefully he will be willing to listen to your reasons. If not, there's not much that can be done until you upgrade yourself.

My airline has a "bid avoidance" feature that can be used by F/Os to avoid people with whom they really don't want to fly, but it comes with the price of subrogating their own seniority. This feature didn't exist when I was in the right seat so the "suck it up" or "talk it out" methods were all that were available. It did, though, in some measure force people to get along to some degree.

Take a Look in the Mirror

If you find that you seem to end up having more than a few tiffs in the cockpit, then perhaps the problem doesn't lie with the other guy. If it seems to you that everyone you fly with is a pig-headed jerk, then that may become a clue for you. I think this advice is especially useful for captains. F/Os are naturally inclined to become chameleons, so if you find that your cockpit has a tense atmosphere or you spend a lot of time eating alone in the hotel, perhaps some introspection is merited.

Captains, on the other hand, really get very little feedback. Some are conscientious enough to ask how they're doing, but many are not. Most people with a blind spot are unaware that they have one, which is why my above advice to not keep things to yourself may be more useful than first thought.

Do I have war stories about conflict in the cockpit? Yes I do. I think conflict of some sort with another pilot is inevitable given enough time. My personal technique is to try to not bring up topics which might be touchy such as union issues or politics. I'll talk about that stuff all day long if it comes up, but it is much easier to "kick someone's anthill over" when discussing those things as opposed to Da Bears. And I'm not a huge sports fan, but being at least somewhat conversant in sports can be helpful.

Unlike many other workplace environments, a cockpit is an especially bad place for conflict. Both pilots must make an effort to recognize and to quarantine conflict. Getting things on the table early and using techniques such as humor can go a long way to defuse the bad feels. Pilots aren't necessarily known for being great "people people" but getting along up front should be considered as essential a skill as maintaining airspeed on final.

Of course, I always get to fly with my favorite jerk.

Email ThisBlogThis!Share to TwitterShare to FacebookShare to Pinterest
Filed under: airlines, pilots, safety