ALPA and the Pilot Shortage 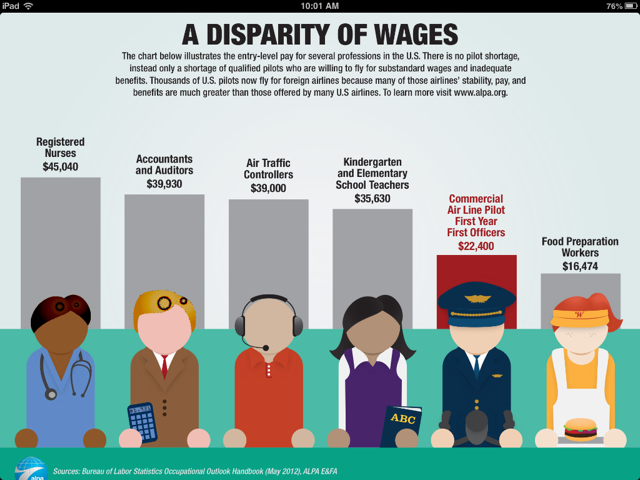 The Airline Pilots Association, a union representing the pilots of most of the largest airlines save Southwest, recently weighed in with a press release on the pilot shortage. ALPA was commenting specifically on a recent GAO report concerning pilot staffing.

Unsurprisingly, ALPA's take is that there are plenty of pilots available but the problem is one of low wages:


In a sense they're right but they are cleverly sidestepping the issue. The people who write these releases at ALPA are not stupid people but they are counting that their readers are. At least as far as Economics 101 is concerned. Specifically, the coming pilot shortage, while somewhat demographically driven, has been exacerbated and its arrival has been accelerated by recently adopted policies which ALPA itself championed in Congress. Returning to the scene of the crime, ALPA lamely cries no one here but us chickens!

ALPA was instrumental in getting the new minimum hours and rest rules recently enacted which are being credited with making the pilot shortage worse. ALPA of course denies this:

Although some within the airline industry blame the legislation and resulting FAA airline pilot
qualifications and training rules for a pilot shortage, the airline industry actually helped craft those rules and supported their passage. We believe that they did so, just as ALPA did, because of a genuine concern for aviation safety. Several accidents over a number of years, arguably the most troubling and recent of which was the Colgan Airways accident in Buffalo, NY in 2009, caused a justifiable groundswell of support for the new and safer increase in the minimum qualifications for pilots to be hired at our airlines, the scope of which goes well beyond the number of hours that a first officer must have in order to enter the Part 121 industry.


Sorry. This is just laughable. As we've pointed out before,  neither of the so-called fixes recently enacted by Congress in response to the Colgan 3407 accident which are currently upending the industry and worsening the pilot shortage, would have changed anything. Both of the pilots on that flight had the minimum number of hours and required rest under the new rules. What ALPA is now doing is using a crisis they helped manufacture to call for higher wages.

The American commercial transport system has been and continues to be simply the safest in the world. This latest round of rulemaking just makes it more expensive and less economically viable.

The joke however, is on ALPA. Wages will of course rise either with or without ALPA's agitation. This is simple supply and demand Econ 101. What may also likely happen is that some of the entry level jobs which are where the pilot shortage is manifesting itself will simply disappear. If operating margins for mainline airlines are thin, the margins at the commuter or regional airlines are even thinner. These airlines will simply reduce or cease operations to their least profitable locations resulting in fewer jobs. It's amazing how this capitalism thing works.

ALPA next makes an emotional appeal to fairness:

There is a quantifiable shortage of pay and benefits for pilots in the regional airline industry, not a shortage of pilots who are capable and certified to fly the airlines’ equipment. According to ALPA’s figures, which vary from GAO’s just slightly, the average starting salary for new first officers in the regional airline industry is only $22,400, which compares very poorly with the starting salaries of other fields for which university aviation program graduates are qualified to enter, which include: test engineer ($52,500); operations manager ($55,000); and, second lieutenant in the Air Force, the entry level for most military pilots ($53,616 in salary and allowances). It is worth noting that the average starting salary for elementary school teachers ($35,529)—which is widely believed to be an underpaid profession—is substantially more than that of regional airline first officers.


Well they are a union we suppose, and appealing to emotion does pay dividends (See Party, Democrat) with the low information products of most American public schools. But that still doesn't make it anywhere near a valid argument. The reason a first time new-hire pilot would agree to a job paying just $22K is because he wants to. For a new-hire regional pilot, his compensation is not just money: it's also flight hours.

Unlike all the other professions listed which have higher starting salaries, the airline piloting profession can top out at pay of over $200k with a three day work week. It's a nice gig even though it will probably take about thirty years with a major airline to get there. And to get a job at a major airline you need flight hours. Lots of them. The only place to get them is either by working for a regional airline or in the military. The regional airlines know that most of the pilots working there are simply gaining flight time so they can move on to a major airline. For this reason they pay low wages. They don't have to pay higher wages to attract pilots, so they don't. The rest of the compensation is flight hours.

This is analogous to the reason medical residents or partner track lawyers endure harsh hours for low pay. It's a condition of entry into a well paying career field. You'll also notice that very few former military pilots are flying for the regional airlines. That's because they already have the requisite number of hours to apply for a major airline job.

Now if you look at starting salaries of most major airlines, you'll find numbers in the $40-50K range. United Airlines just recently nearly doubled their starting salary. Why? Because they know there will be a great demand for qualified pilots coming out of the regionals as replacements for retiring baby boomers. See, this whole economics thing really does work!

So what is the real reason for the pilot shortage? We believe there's a multiplicity of reasons:


That said, if you've got the scratch, and the fortitude, now is a really good time to get into the career field.

There was certainly a time in this country when labor unions served a valuable and needed service, that of labor advocate. Workplaces were often dangerous and unhealthy places and should a worker become injured on the job, he would be summarily fired with no recourse or income. Unions provided support for injured or disabled workers and advocated to make workplaces safer, in addition to their traditional role of agitating for higher wages through strikes and collective bargaining.

The reason that private sector labor unions are in decline is not because these needs have diminished, it is because these functions of unions have been largely supplanted by government. Workplace safety, disability insurance, healthcare, pensions, and job discrimination are all functions now handled by the government through a myriad of agencies such as OSHA, NLRB and PBGC to name just three. This loss of writ has left unions with their remaining function of negotiating wages through collective bargaining.

Large monolithic manufacturers were ideal for union organization as only several contracts across a few corporations could set a standard wage which would cover many thousands of workers. Workers in smaller but similar corporations could use the higher wages of the larger corporations to agitate for "industry standard" wages or threaten walkouts.

This worked well in the post-war era as there was essentially no competition for American manufacturing. As offshoring and foreign competition increased however, inefficiencies caused by union forced work rules and overreach took their toll. Many old line businesses found themselves fighting for survival with nimbler overseas or upstart non-union competitors.

Even as workplaces became ever safer, unions recognized that invoking safety was still a very useful tactic for improving work conditions. This continues today. While care must be taken to not throw out the baby of real safety improvement with the bathwater of agitation for easier work rules, this latest round of ALPA inspired rule-making does little for actual safety while further handicapping an already low margin business.

And we say this as a union pilot who operates under this system.