How Does an Airliner Run Out of Fuel? 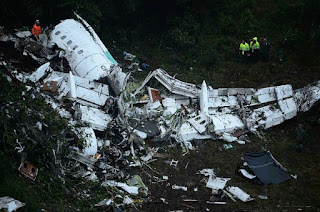 While the investigation into the crash of the LaMia RJ-85 airliner in Columbia is still ongoing, it is becoming apparent that the aircraft ran out of fuel. Investigators at the crash site noted that there was no post-crash fire or fuel spillage. Other evidence suggesting fuel starvation is that photos of the fan blades on the engines appear to show them to be mostly intact. A spinning engine often throws its blades upon impact suggesting that the engines were not operating.

Other significant factors affecting this flight were the length of the leg, an arrival delay imposed due to another emergency aircraft, and the status of the pilot as a part owner of the charter airline. Also of note is that the first officer was on her first flight as a commercial pilot.

How Much Fuel Did They Need?

Any airline will be subject to the regulations of the country in which they are based, but most countries' rules conform to guidelines published by the International Civil Aviation Organization (ICAO). ICAO rules state that any aircraft must have enough fuel to travel to its destination and any alternate airport plus an additional 45 minutes for reserve. The investigation will determine if the LaMia aircraft departed with sufficient fuel.

Remember, though, that winds aloft, weather, payload, and even temperature can affect the fuel range of any airplane. There is no hard and fast mileage number to apply. The investigation will need to reconstruct all the planning data that the LaMia pilots had.

The first and perhaps most common way to run out of gas is due to simple human error. This can result in an aircraft being mis-fueled or having an erroneous fuel reading due to a bad gauge. Call it inadvertent...when it gets quiet while still airborne, the pilots may be surprised the most. This can take multiple errors by fuelers, mechanics, or pilots who can be extremely inventive in finding ways to circumvent procedures designed to catch fuel errors, but it has been known to happen.

The second way to run out of fuel is to have a lapse of judgement, or what we in aviation call airmanship.

This Has Happened Before

Part of the essence of being a pilot in command of a commercial aircraft means internalizing the fact that 1) you're on your own and 2) that everyone aboard is depending on you. Of course you aren't literally on your own as you have resources such as your first officer, air traffic control, and dispatch, but no one will be there to hold your hand or pull your chestnuts out of the fire if things go wrong. The nature of the job means that you will be made, in some way or another, to own the decisions you make.

Keeping your eye on your fuel state is one of those "Aviation 101" things that every pilot gets pounded into them from day one. Running out of gas is something you just don't do if you're aware of the two precepts above. It is rare but it happens.

In 1978, a United Airlines DC-8 crashed outside of Portland, Oregon after running out of fuel. The pilots had become preoccupied with a bad gear indication and flew around until the fuel ran out. The engineer was not assertive enough to communicate the plane's dire fuel state to a distracted captain. As the engines quit, the captain implored the engineer to "keep them running". He forgot that it was his job to land before the fuel ran out.

Again in 1990, an Avianca Boeing 707 crashed after running out of fuel on approach to New York's JFK airport killing 74 passengers and crew. The cause was determined to be a language barrier and misunderstanding by the crew in communicating their fuel state to air traffic control. Specifically, air traffic controllers will not give priority handling to any aircraft unless the word "emergency" is used. The Avianca crew did not use that term and ran out of fuel after extensive traffic delays.

In both of these cases, the pilot in command failed to take appropriate actions to land before the fuel ran out. It really doesn't matter what air traffic control says or what state the landing gear are in. It would've been better to belly in or to disregard controller instructions than to crash. Making uncomfortable choices between two potentially unpleasant options is a big part of being a pilot.

Was This Careless Flying?

While the investigation is far from complete, a picture is beginning to emerge. LaMia, which only owned this one aircraft, was known to be one of the cheapest charter operators available for hire in the region. A takeoff delay also meant that a potential refueling stop was not available due to the closure of that field. It also turns out that the pilot in command was a part owner of the company who may have let financial concerns cloud his judgement.

Lastly, his copilot, Sisy Arias, was on her first ever commercial flight as a pilot. This is important because in her very inexperienced state, she may not have been aware of the fuel situation nor was she likely to intervene even if she was.

There's an old aviation aphorism floating around which states that the definition of a superior pilot is one who uses their superior judgement (proper fuel planning) to avoid situations requiring their superior skill (doing a night dead-stick landing into mountainous terrain).

Aviation is a profession that calls for strict adherence to unmalleable rules. Behaving recklessly is bad enough, if that is indeed what happened here, but the real tragedy is in betraying the trust of your passengers and crew.
Posted by The Captain at 4:18 PM