Approach, We Need to Divert 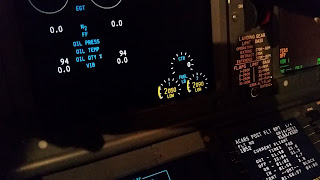 Being a good pilot means always having a backup plan. I don't care if you are a VFR-only pilot on an afternoon outing or pushing back in a twin aisle airliner for an overseas leg. The very nature of aviation means that things will never go exactly as you planned, and sometimes not even close to how you planned.

This means you need a backup plan. What happens if you have a mechanical? How will you react if it happens on takeoff? What if you don't break out on the approach? How about if your alternate weather goes down enroute? All these questions should be in the back of your mind before and during your flight. Then, should something happen that you didn't anticipate, reacting to it is a simple matter of implementing your backup plan rather than having to take the time to come up with a new plan.

We were scheduled for the first day of a three day trip to fly a round trip from Chicago's Midway Airport to New York's LaGuardia and then back east to Newark's Liberty Airport for the overnight. The trip from Chicago to New York had been uneventful and we even landed early due to a strong tailwind of about 100 knots.

The departure weather at LaGuardia was VFR and we departed at about 1705 local (2205Z) without much delay at all, which was especially good for any New York airport. The forecast for Midway, issued at 1729Z was IFR with low ceilings and visibilities forecast:

A quick translation of this forecast shows that the visibility was forecast to be one mile with rain showers and a ceiling of 400 ft for our arrival.

Even though there was a "TEMPO"  or "temporary conditions" line in the forecast for 1/2 mile visibilities, this was not due to happen until 0300Z on the 17th, or a few hours after our arrival. Chicago is six hours behind Zulu (GMT) time which means Zulu midnight is at 6:00 PM in Chicago. We were, however, still required to have an alternate, and had Louisville (SDF) declared on our release.

Midway has five runways forming a cross pattern but only two strips of pavement are suitable for air carrier operations, 31C/13C and 22L/04R. They were landing runway 4R for our arrival. That runway is served by an ILS with minimums of 5000 ft. or 1 mile.

The METAR, or current observation for our arrival showed a 300 ft. ceiling with a visibility of 6000 ft. Piece of cake, we thought. The decision altitude (DA) for our runway was 250 ft. height above touchdown (HAT) and the visibility was a good 2000 ft. above what we needed.

My first officer was flying the approach and was highly experienced, so I had no reservations about letting him fly this approach. So as we were being vectored to final, we heard approach mention that the visibility was being reported as 4500 ft. I then said that we needed 5000 ft. to begin the approach after which approach quickly revised the report. We were alerted though to expect an approach right to minimums.

The next thing we heard after switching to tower was the aircraft in front of us announcing a go-around. Now we really knew that it would be close. An old technique of mine is to run my chair forward so as to be able to see over the nose. If we could pick up approach or runway lights, we'd be cleared to descend for landing and doing this helps. One small problem is that runway 4R at Midway has no approach lights, only runway end identifier lights and a precision approach path indicator (PAPI). Great.

Well, we got down to minimums and I announced "minimums". There was nothing in sight at all. My first officer announced "go-around", hit the takeoff/go around (TOGA) button, pushed the throttles up, and around we went. Here is where it got busy.

We get the airplane away from the ground, cleaned up and on a downwind vector and then we have some decisions to make. Is the weather persistently bad or was that just a passing cloud? Do we have gas for another try? Is my declared alternate the best choice and what's the weather there?

Right away I saw that the first question was moot because we didn't have enough gas for another try. I had just under 8000 lbs., and the burn to my alternate, Louisville, was about 3000 lbs., enough to get us there comfortably, but none to try again. So on downwind we told approach that we needed to divert. They gave us a climb and handed us off to center. Center gave us a vector direct to Louisville, which was VFR.

Louisville may seem like a rather distant alternate, but there was most likely some method to their madness when dispatch filed this flight plan. When a busy hub airport like Midway goes below minimums, chaos breaks out everywhere. Dozens of airplanes might be looking for alternates at the same time. One of the closest and most obvious alternates is Indianapolis, but they can be quickly overwhelmed with diverting airplanes in a short amount of time. So dispatch tries to spread out the pain of multiple diversions to other airports depending on the weather. Tonight Louisville and Milwaukee drew the short straws.

The approach and landing in Louisville were normal. We were then directed to an unused runway where we sat until there was a gate available. All the gates were full and there was one airplane in line in front of us, so we waited for about an hour until we could park. The agent already had our paperwork for the trip back to Chicago. The weather had come up some and should’ve been good for our return. Midway was now landing on runway 31C which had a 4000 ft. minimum visibility as well.

We signed the release, got our gas, and pushed back. The flight back to Chicago was also uneventful, at least until we got to minimums on the ILS to 31C. It was now my leg. We briefed and flew the approach pretty much the same way we had a few hours earlier. When my first officer says "minimums", I didn't see anything. I thought "here we go again". Just as I start to push the throttles up for our second go-around of the evening, I saw the runway. I pulled the throttles back and we landed well within the landing zone and taxied to the gate.

All in a day's work, right? Now we’ve got maybe 30 minutes to find some dinner and to get the airplane turned around for our delayed, but final leg of the evening to Newark. As I step out into the jet way, I see a pilot friend of mine. I ask him if he's deadheading to Newark but he says no, he's working the flight. I said that can't be because I'm working the flight. A quick check of the paperwork shows that indeed, he is flying the next leg. So I go back to the cockpit to gather my gear and then check the computer when I'm back in the terminal.

Sure enough, I've been tagged by Part 117, our new flight time regulation. With all the excitement, I've racked up seven hours and eighteen minutes of block time. With the Newark leg forecast to be about two hours, this put me over the maximum flight hours by about 20 minutes, hence I was illegal to operate the flight. Scheduling was nice enough to find me a hotel room in Chicago thus saving me a rain-soaked trek to my crash pad. It is honestly the little things that count.

The next day I am rerouted to a different city than my originally planned trip but it pays the same so there's no harm. All in all, it was just another routine divert and reposition. And the reason that I use the word "routine" is because I was ready for the weather to go down. Diverting is a headache, sure, but at no point was I "uncomfortable" with how things were happening.

We were both well trained and prepared, and were flying a well-functioning and reliable airplane. Things won't always go how you might have planned, but that is never any reason to be caught by surprise.

Captain Rob Graves is a veteran airline pilot and retired Air Force officer. He currently flies a Boeing 737 for a major American airline where he has over 25 years of experience. His Air Force career included flying the T-37 primary trainer, the KC-135 Stratotanker, and the C-5 Galaxy cargo aircraft for worldwide operations. He is the author of This is Your Captain Speaking, an aviation blog. It can be found at robertgraves.com. He also writes forAvgeekery.com.

Email ThisBlogThis!Share to TwitterShare to FacebookShare to Pinterest
Filed under: aviation, weather