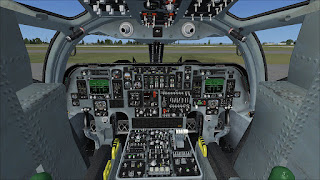 The Air Force has a pilot problem. It doesn't have enough. The service says that the problem is reaching "crisis" levels with a current shortage of 1500 pilots. Having exhausted all means to convince their current pilot force to remain in the service, and unable to increase the number of new pilots produced, the Air Force appealed to the President to revise an executive order allowing for the recall of up to 1000 retired pilots to active duty. President Trump signed this order last Friday touching off a firestorm of social media commentary.

In many ways, this problem has existed for decades, even stretching back to the 1980s when I first wore the green bag (flight suit). The issues are the same and the same arguments get made over and over. What has changed is simply the intensity of each issue affecting pilot retention. As the saying goes, you can't tell who's swimming naked until the tide goes out. And the tide has indeed gone out.

Air Force personnel managers are charged with managing the pilot force to maintain appropriate force levels. They not only manage the total number of pilots, but also the personnel levels existing at various career stages. They attempt to keep a surplus or deficit from existing anywhere along the career "pipeline". Tools at their disposal are the management of training rates, promotion rates, and incentive programs used to either retain pilots or to encourage them to separate.

Looking at the inflows, the number of pilots that the Air Force can train in a given year, there was a huge reduction in initial pilot training capacity dating from the end of the cold war. Training bases were closed and resources were reassigned. Total pilot production was reduced from about 1500 to 500 pilots annually in the early 1990s. That number has recovered somewhat; about 1100 pilots were produced in 2016. The Air Force is attempting to ramp this production back up, but planners estimate that a maximum of 1400 pilots per year is the ceiling given current numbers of training aircraft and other resources.

It is on the outflow side, however, that the problem becomes clear. In short, pilots are bailing out of the military to take airline jobs—just as they always have when the airlines come a calling. It is here where the pilot retention problem really looks like a rewind of the 1980s. Back in the late eighties, the airlines were on a hiring tear, scooping up as many ex-military pilots as they could get their hands on.

I specifically recall being asked to participate in a round table discussion with the wing commander to address the issues of why pilots were leaving the service. The complaints I heard back then are eerily similar to the ones being voiced today. Pilots chafed at too many non-flying additional duties (affectionately known as "queep"), not enough flying time, and a lack of leadership. Here is an example of the unrest from the comments of my blog (in the original):

...additional duties that have nothing to do with flying, PME (professional military education-ed) requirements to get promoted that have to be accomplished in off duty spare time, 24/7 on call status, exercises that have little to do with flying, PT (physical training-ed) requirements that have to be prepared for in spare time, mountains of regulations based on a single act of buffoonery with the goal of preventing bad judgement from ever happening again, i.e. The Shotgun Approach to problem solving, time off is time off. Not everyone wants to be a four star general/politician/professional staff officer but, the senior AF brass expect everyone to jump through time wasting hoops to be prepared for that minute possibility.


One factor which currently helps to push pilots out of the service which largely did not exist back in the 1980s is the deployment rate. Deployments, or long term tours away from home lasting weeks or months, are now the rule rather than the exception. Air Force pilots flying tactical or theater based aircraft can expect multiple, lengthy, deployments during their career. No amount of incentive money will likely dissuade these pilots from exiting the service once their service commitment is over.

When the Airlines Hire, Pilots Leave


So are pilots actually leaving the service in numbers greater than they have in past airline hiring surges? A 2015 Rand study which examined the issue of fighter pilot retention, defined a measure of total active rated service (TARS) to measure the retention of pilots. Denoted in years, it measures the average length of time a pilot remains on active duty. 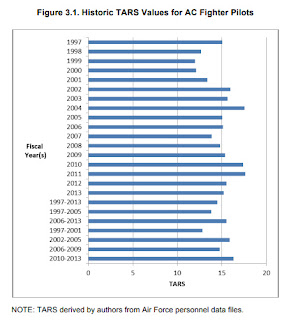 As you can see, the rate at which pilots leave the service (thereby shortening their active duty years) roughly corresponds with airline hiring, verifying that in spite of conditions in the military, when the airlines are hiring, pilots will leave.

At work here also is the psychology of the airline seniority system. Nearly every measure of quality of life in the airlines is determined by one's seniority, or hire date. Logic dictates that if a pilot has decided to eventually go the airline route, an earlier rather than later departure from the military will be better. This "fear of missing out" no doubt drives many pilots off the fence onto the side of the airlines, but it also presents an opportunity to help solve the problem.

Can it be Fixed?

Anything can be fixed given enough money and imagination, which unfortunately, seem to be in short supply these days. From a merely economic point of view, matching airline pay rates dollar for dollar might help, but the calculus would then be why work harder for the same money? To beat this problem with money will require quite a bit more than the military is willing (or able) to pay.

To their credit, Air Force leadership has recognized the toll that nonstop deployments have taken on the force and are moving to reduce them. Other initiatives include keeping pilots in the cockpit and out of staff positions by utilizing non-pilots for those staff positions.

One possible solution to the airline seniority problem might be for the airlines to interview, provisionally hire, and guarantee military pilots a seniority position based on that interview date. This type of program would mirror the "flow-through" programs which some regional airlines have with their mainline counterparts.

Requiring a longer service commitment seems to be a well that has run dry. Currently at 10 years from completion of training (up from six when I joined in 1982), the length of that commitment will eventually dissuade the best and brightest who have other options.

Then, of course, there is the brute force method, of which an involuntary recall of retired pilots would be a showpiece. Other levers include the use of a "stop-loss" program which simply closes the door to pilots leaving the service prior to retirement. Invocation of a stop-loss seems the more likely course in lieu of a retirement recall. I have personal experience with that, being prevented from retiring for awhile back in 2003.

The last policy prescription I'll offer is to simply define the problem away. It still escapes me as to why we're deploying state of the art fighters against Pashtun goat herders in the Hindu Kush, especially when the place will look like we were never there a year after we leave.

The Air Force's pilot retention problem is the same as it ever was. When the airlines hire, pilots leave. The complaints about the service being made today echo not only those I heard back in the 1980s, but also those of Joseph Heller's Yossarian voiced in Catch 22. Creative management and incentives will help stop the bleeding, but the tide of a world wide pilot shortage is a powerful force.


Captain Rob Graves is a veteran airline pilot and retired Air Force officer. He currently flies a Boeing 737 for a major American airline where he has over 25 years of experience. His Air Force career included instructing future USAF pilots in the T-37 primary jet trainer, aerial refueling in the KC-135 Stratotanker, and conducting worldwide logistics in the C-5 Galaxy cargo aircraft.