What's Next for the Max? 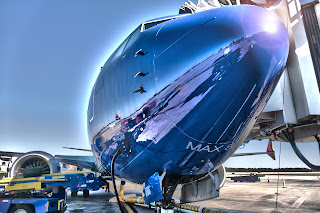 As an aviation blogger, the past few days have been simultaneously hope inspiring and depressing. Hope inspiring as many people understand, or make a good faith attempt to understand, the underlying issues surrounding the 737 Max. But also depressing as random fanbois, trolls, and low information, yet self proclaimed experts, happen by my comments section to disgorge their dubious wisdom on things about which they know little or nothing.

Mencken was Right: No One Ever went Broke Underestimating the Intelligence of the Public

When I noted that the MCAS system could be completely deactivated using two switches mounted on the center console, a commenter replied that well, "maybe the switches reconnected themselves". Other than the testing of those switches being a mandatory preflight item, this commenter has obviously confused the Boeing 737 with the SkyNet model T-1000 Terminator which can rewire itself automatically.

Lastly, when one commenter [Hi Scott!] boldly opined that the 737 was the worst airplane he'd ever flown on, I replied that my passenger experience is usually more dependent upon the particular airline and class of service rather than the aircraft type. This big brained person assured me, however, that no, none of that mattered. He apparently would rather sit in a non reclining 28 inch pitch economy seat on a Spirit A320 than a first class seat on a JAL 737.  [Sigh]

So the FAA bowed to international and media pressure and grounded all Max aircraft, which is proving to be a minor inconvenience to most operators of the aircraft. I was personally walking out to a Max to fly to Phoenix when the announcement came. Someone somewhere had done some preparations and an -800 was towed to the gate by maintenance about 10 minutes later for a slightly delayed departure.

We of course are now treated to the circular logic of all the "I told you so" stories. The process starts as media sensationalism whips up a gullible and credulous public followed by outraged calls for the aircraft to be grounded. After weather-vaning politicians cave into public pressure, preening media talking heads then get to state that something must have been really been wrong. And so it goes.

Make no mistake: this grounding has more to do with public relations and marketing than safety. As of yet, there is very little evidence that the two Max crashes are in any way related other than the most superficial of circumstances. But the tsunami of media scare stories and sensationalism showed no signs of abatement, so this was the correct decision.

The FAA cited "newly" discovered satellite data which finally swayed their decision.They are referring to the ADS-B tracking system which relays flight parameters to air traffic control through satellite. This information, however, was publicly available shortly after the crash and it does show some minor altitude excursions, though nothing is conclusive.

The cockpit voice recorder and flight data recorder from the Ethiopian crash have been recovered and sent to France for analysis. Again, prescient commenters noted that this was a good thing because, of course, had they been sent to the US, American investigators would falsify any result finding the US producer of the aircraft at fault. I actually agree with this decision in spite of the slander against the integrity of the NTSB and other US investigators. Having French investigators analyze the data will deflect the inevitable cries of bias should the investigation find fault in anything except the aircraft itself.

What happens next is we wait for the data from ET302 to be downloaded and released. When that happens and a likely cause of the accident can be discerned, the Max will be cleared to fly. Notice that I didn't say that this clearance will in any way be dependent on the outcome of the investigation. The aircraft will be flying again in a matter of weeks regardless of the findings.

Why you ask? Should the MCAS system be implicated in this crash (unlikely in my opinion), there will be software fixes and training updates offered. As I've noted many times, the system can be deactivated completely through the use of two center console mounted switches. Even then, the system should only activate in the case of gross pilot negligence resulting in an aerodynamic stall or, as in the case of the Lion crash, an errant sensor input due to a mechanical malfunction.

The software fixes will preclude the activation of the system due to the failure of a single sensor. The training updates will reemphasize to all operators that undesirable electric trim inputs can be inhibited through the use of the center console mounted stab cutout switches.

Should the MCAS system not be implicated in the ET302 crash, the Max will be back in the air that much sooner. Make no mistake, all airline crashes are tragedies of the highest order for everyone involved. The object of any investigation is to find out what happened and to take measures to prevent any future recurrence. Commercial aviation is one of the safest, if not the safest means of transportation available.

What will be left is a mopping up by the lawyers.


Captain Rob Graves is a veteran airline pilot and retired Air Force officer. He currently flies a Boeing 737 for a major American airline where he has over 25 years of experience. His Air Force career included instructing future USAF pilots in the T-37 primary jet trainer, aerial refueling in the KC-135 Stratotanker, and conducting worldwide logistics in the C-5 Galaxy cargo aircraft. He is the author of This is Your Captain Speaking, an aviation blog. It can be found at robertgraves.com. He also writes for Avgeekery.com.