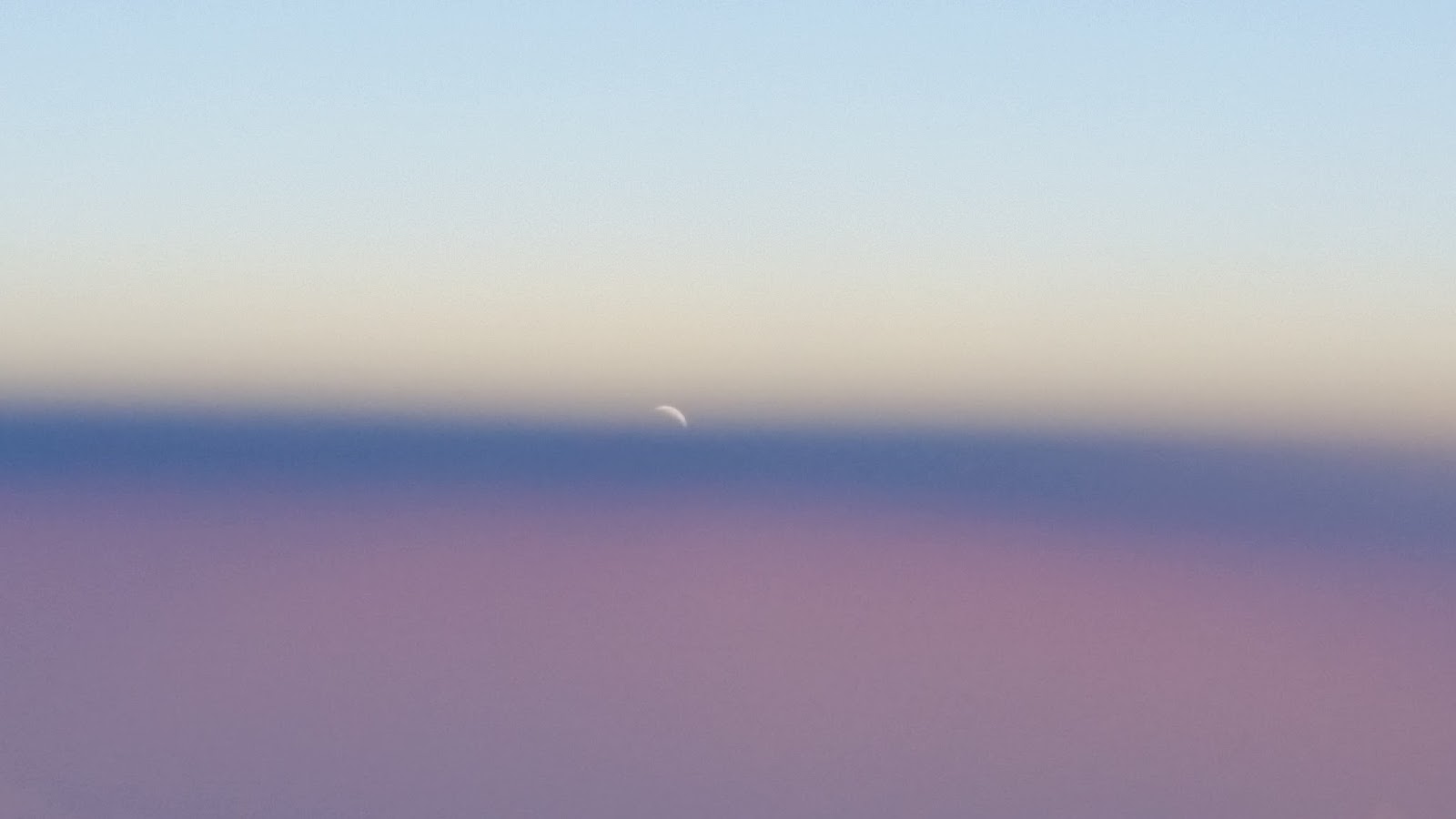 This Wednesday past there was a total lunar eclipse which was visible over most of the United States. This particular event started at about 0420 eastern time. As chance would have it, I was on an overnight in Tampa, with my first leg being to Houston over the Gulf of Mexico.

Having heard of it somewhere on the news the day prior, I was aware that it might be visible the next morning as we were scheduled to leave Tampa at 0650 to head west. The moon wasn't visible from my hotel room but was visible as I walked outside of the hotel to get on the van at 0550.

By the time we got to the airplane, about 0620, the moon was nearly fully occluded. It was being called the "blood moon" by some in the media though it didn't appear especially red to me. My guess is that for those watching it as the moon sets, it appears red for the same reason sunsets appear red. The light is refracted through the atmosphere and dust particles in a process called Rayleigh scattering.

Standing out on the provisioning truck, I attempted to get a photo of it but cell phone cameras are just not up to the task of capturing night sky objects. After dealing with a minor maintenance item of a balky cockpit display, we were on our way. As our customers were being entertained by a live satellite internet feed of the Cooking Channel, we had a somewhat more interesting show up front.

The timing and our course really couldn't have been more perfect. The sun was rising up behind us but we were travelling at a groundspeed of nearly 500 miles an hour away from it, so the shadow of the earth up into the atmosphere created a light and dark area ahead of us. We were also at 38,000 ft so the view was unimpeded by clouds.

The View From the Corner Office

While flying around in a jet all day affords a great view of the earth below, equally inspiring can be the view of celestial happenings. Over the years, I have had the pleasure of having a front row seat to all manner of astral events from comets to meteor showers to eclipses.

Being above most of the atmosphere does afford the casual observer of the heavens a great view, but one must know what to look for...and where.

Some events are once in a lifetime occurrences such as the appearance of the Hale-Bopp comet in the winter and spring of 1997. Becoming the second brightest object in the sky and being visible to the naked eye for nearly a year and a half, Hale-Bopp was spectacular from the airplane at night and nearly impossible to miss. And it won't be back for another couple of thousand years.

I was flying up and down the California corridor quite a bit back then and depending on the direction we were flying, the comet was not always visible. The 737, as with most airliners, while having good forward visibility does not afford the best viewing for objects above or behind the aircraft. And in recent years, the small windows above the main wind screen, or the "eyebrow" windows, have been permanently removed and sealed with opaque panels as a cost savings measure.

Meteor showers can be quite striking from altitude and they are recurring events. The Leonids get their name from the constellation Leo, from which the meteors appear to originate. They are visible annually in November and are the remnants of a comet through which the Earth passes. The Perseids occur in August and appear to emanate from the constellation Perseus. While at their peak, a meteor shower appears as many bright streaks across the sky per minute.

The trick to seeing these cosmic light shows is of course to be flying on the night that the phenomena is visible, and then to be flying in the correct direction. The Perseids are visible in the northeast sector of the sky, so if you happen to be flying from say St. Louis to Phoenix that night, you won't see them. Most times this is just pure luck unless you are very careful when bidding your trips.

The most prominent object in the sky, and often the bane of pilots is the sun. Dating back to WWII and before, the sun has been used by attacking fighter pilots to conceal their whereabouts from targeted aircraft and ground emplacements. Coming from the direction of the sun effectively blinded defenders until the attack was upon them.

And the sun is still up to its old tricks blinding pilots. Having an early morning go on an easterly course means that shortly after takeoff, the laminated cards with checklists and other reference data are securely in place nestled between the glare shield and the top of the windscreen. Maps are also handy for this function except that with the introduction of electronic flight bags, paper maps are going away and an iPad makes a lousy shade.

One might complain that blocking the forward view is hazardous due to not being able to see potential collision conflicts. This is true, but intruders are not visible anyway with the sun directly in your eyes and using the maps preserves your retinas for future use.

Takeoffs and landings into the sun can be a challenge as well. Landing on runway 25 in Las Vegas at sunset often finds that golden orb perched just above the runway of intended landing. One hand on the yoke and one held out in front to shield your eyes leaves you one hand short to control the throttles. Sometimes setting your seat higher or lower may work to shield your eyes but at other times you just suck it up and hope you're mostly on centerline for touchdown.

Once I had the opportunity to visit the Phoenix Sky Harbor Tower and asked the controllers why Phoenix always took off to the east in the morning and landed to the west in the afternoon. The winds in Phoenix are almost never a factor in determining the active runway so the decision was up to the tower controller. He told me with a straight face that it was to keep the sun out of the controllers' eyes.

Great. Wouldn't want the guys sitting on terra firma to be blinded as opposed to the guys actually flying the plane.

While it's well known that most aircraft can't keep up with the sun as the earth spins, this isn't true in all cases. One of those times would be if you were in say an SR-71 supersonic aircraft travelling over about 1000 mph ground speed at the equator. Another is if you move further north to attempt this same feat in a slower aircraft.

Though the math is more complicated due to the rotational axis of the earth being 23 degrees off the vertical of the solar plane, the speed the surface of the earth rotates decreases as a function of the cosine of the angle of latitude. (This is also the genesis of the Coriolis effect which causes most of our weather and bathtub drain water to swirl)  Go far north enough, and your airplane can keep up with the sun, or at least give it a good run.

That means you might have the sun hanging in the middle of your wind screen for hours on end. Which once long ago we did. Leaving Anchorage for Yokota Air Base, Japan one afternoon in a C-5 had us taking off just as the sun was camped directly in our face. The C-5 is a large aircraft, with a very large windscreen. It probably took most of the maps in our worldwide kit to paper over the cockpit to keep the sun out.

And there it hung in the windscreen for nearly eight hours until we started our descent into Japan.

On moonless nights at altitude, the sky is an amazing tapestry of things most earthbound observers never see. The Milky Way is easily visible snaking across the sky with the dark areas such as the Great Rift also visible. Though modern aircraft navigate with GPS and inertial systems, the stars that ancient mariners used to navigate the seas are familiar friends for those who care to look. Orion, Cassiopeia, the Big and Little Dippers, the Pleiades, and many more are always there waiting for your next journey above the clouds.

When I started in this business several decades ago, some pilots were never without their handy printed night sky guide replete with glow in the dark print. Those have now been replaced by mobile phone apps which automatically orient themselves to your current location and time for an accurate sky depiction.

The planets can play tricks on unwary pilots around dawn or dusk. More than a few times I've overheard irate pilots insisting to air traffic control that they have converging traffic which the controller had failed to point out. This always gets the Venusians to laughing wildly.

Occasionally we might see a single re-entry of a meteor or perhaps some space junk. It can look like a roman candle with many pieces flying off a main part. Once in broad daylight over New Mexico, we saw one of these and I almost caught myself ducking because it seemed as it was just over our position. Then the frequency lit up far and wide with pilots asking "Did you see that?" It apparently looked closer than it was.

My essay wouldn't be complete without a comment about man-made celestial objects. Though I never saw a shuttle launch, I've been told that they were visible for hundreds of miles in the air. Of the launches I have seen, they were both from California's Vandenberg AFB. One of them I saw while flying over Nevada several hundred miles away was very impressive. The other was from over Texas.

We were flying from San Antonio to El Paso and in the distant haze saw a light move from the horizon up into the sky above us. As usual, the frequency lit up with questions about what it was and where it was from. Most of us thought it must've been a launch from the White Sands Army Missile Range north of El Paso. The controller said "hold on, let me check." Then he came back, "not White Sands, Vandenberg." Nearly a thousand miles away.

We'll end our sky tour with the Northern Lights. Though my routes rarely go far north enough to be able to regularly see them, there have been a few occasions when I've seen their eerie green glow pulsating from the north. I once even saw them while on arrival into Chicago, much further south than is normal.

And though I've never seen a UFO, that certainly doesn't mean they're not out there. They have cloaking devices, you know.
Posted by The Captain at 5:23 PM