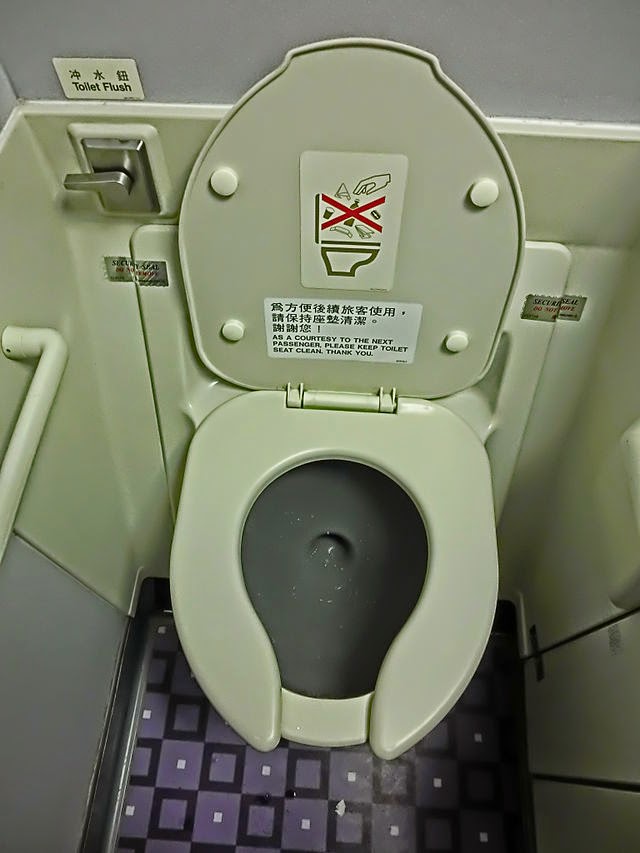 The $600 toilet seat. More than just a cliche, over the years it's become an icon and a convenient shorthand for government waste. But does anyone really know the true story behind the famous $600 toilet seat?

I've even sat on one.

It's an airplane toilet seat. And more. Specifically, the famous $600 toilet seat was actually a fiberglass structure used in the restrooms of the Lockheed P-3C Orion sub chaser aircraft flown by the Navy. In a mini-scandal, it was determined that the fiberglass shroud structure that covered the toilet needed to be replaced. Since the aircraft was long out of production, new parts were needed to be tooled and constructed.

Once all the costs of production were rolled into the final product, the cost was about $600, probably a deal for a custom part long out of production. This will be no mystery to anyone who works on antique autos. One-off or limited production of complex parts and machinery is expensive. It also defines the crazy economics of military equipment procurement.

One might be forgiven for thinking that tactics, strategy, or mission needs drive the military equipment procurement process. To the extent that those concerns drive the process at all, the relation is only tangential. The driving force behind most military procurement is politics. And money. Lots of money.

Let's start with the politics. Every dime of military spending has to be authorized by Congress in a spending bill and signed into law as a budget by the President. In the classic American sausage making and log rolling traditions which define our politics, coalitions need to be formed, foes placated with spending in their districts and allies need to be enlisted to get military programs shepherded through the process to be funded.

The Senator from Lockheed may ally with the Senator from Boeing to get an airplane built if the engines are built in this state and the wings are built in that one. The process is such that new military aircraft need to have parts from nearly all 50 states in order to see the light of day. This isn't the unalloyed evil that some pacifists on the left make it out to be, but rather the process that needs to be accomplished to get things done in a representative democracy. But care must be taken.

In his famous 1961 farewell speech, President Dwight Eisenhower warned of the undue influence on our politics of the military-industrial complex. While military spending has proved a durable reality in the post-war years, it may finally be reaching a denouement as social and welfare spending eclipses military budgets.

The Europeans found out early on that in the contest between a social welfare state and military budgets, the military eventually loses. Having the Americans pick up the tab for your defense spending also helps but that topic is for another time.

In an unattributed quote, it was once said that as military aircraft became more expensive and fewer were bought, eventually all that could be afforded would be one aircraft which pilots would take turns flying. It was an eerily prescient quote. In World War II, American industrial might produced about 97,000 bomber aircraft. Fast forward 40 years and only 20 B-2s, the last manned bomber to be built in this country were produced. And that was at $2 billion per.

Now about the money. The simple fact of the matter is that military hardware is really expensive. Whenever the military procures an item from a civilian source it must be built to what is called "mil-spec" or military specifications. This means it has to be tough. Usually a lot tougher than a similar item sold on the commercial market if it's available at all.

As an example of mil-spec, consider the original Humvee or rather the High Mobility Multipurpose Wheeled Vehicle (HMMWV). Built by AM General a subsidiary of American Motors as a replacement for the Jeep (from GP, or general purpose), a civilian variant was offered to the public in 1992.

Coming equipped with many of the military upgrades such as automatic tire inflation, waist deep water capability and a 6.2L turbo diesel engine, the vehicle retailed at over $40,000 or over $65,000 today. And this was for a basic, spartan ride with few if any creature comforts.

Another factor which drives cost in the procurement of military hardware is limited production runs. Regardless of how many new fighters or bombers are bought, the cost of R&D is the same and is usually accounted for in a per unit cost. This results in the perverse result that a buy of fewer overall units results in a higher per unit cost as the R&D costs are spread over those fewer units.

In a similar civilian production run, the units produced are so great that the cost of R&D becomes vanishingly small. The H2 Hummer originally mass produced for the civilian market was a fraction of the cost of the mil-spec H1. But the same principle applies to things as mundane as a mil-spec flashlight all the way up to jet fighters.

In my 21 year career in the military, I saw the above mentioned process at work time and again in the aircraft I flew and others. Here are a few of my favorites:

As I mentioned recently in my post about the Boeing 367-80, the KC-135 was saddled with inferior engines and an antique water-injection system because the commander of SAC, Gen. Curtis LeMay didn't want to wait for new technology Pratt & Whitney engines to be provided literally months later. This decision, driven by perceived military necessity in the 1950s has probably cost taxpayers tens of millions of dollars but was at least sincerely made in light of the perceived threat the USSR provided.

Now nearly 55 years old, the aircraft is still flying and was scheduled for replacement a decade ago. The reason it hasn't been is a true comedy of malfeasance and incompetence. Back in the 1990s a tremendous effort was made to procure a replacement aircraft based on the Boeing 767 airframe. Amid allegations of illegal kickbacks among industry and military insiders, several people involved went to jail and the contract was thrown open again to bid.

When the European based Airbus won the contract, politics again reasserted itself and declared the contest invalid followed by yet another round of bidding going to the better correct airplane, the Boeing. The Boeing KC-46A Pegasus fleet should cost perhaps $100 billion when finally delivered.

The Air Force's original fleet of C-5A aircraft were built by Lockheed in the early 1970s. Boeing, which lost the competition for this contract, was the real winner by then diverting the resources it had gathered to build the 747. While over 1500 747s have since been built by the Boeing corporation, the Lockheed corporation only built 131 C-5 aircraft and doesn't even build transport category aircraft anymore.

The interesting part of the story is in the procurement of the C-5B aircraft. Due to structural problems in the original C-5A aircraft stemming from a gauge of aluminum which was too thin, the aircraft needed to have new wing skin applied. During this process, Lockheed offered additional C-5 aircraft to the military at a cut rate as most of the production tools were already in place.

Boeing again entered and lost this contest but probably for a good reason that with the Air Force's already existing fleet of C-5s the new Boeings would have been an additional parts and training burden. It was however the engines that are of interest.

The original GE TF-39 engines offered for the C-5B were woefully inadequate to existing technology available in the early '80s. The TF-39 produced about 39,000 lbs of thrust while new technology GE engines could produce thrust into the 50,000 lb range. While the C-5 could barely climb through 30,000 ft with a full cabin load, a 747-200 could go much higher and thereby save more fuel with the same weight.

In an interesting twist, GE was commissioned to complete a study as to which engine should power the new C-5Bs. Miraculously, they came to the conclusion that GE engines would be best. In fact, the same old technology TF-39s was their recommendation.

There was a certain method in this madness. Had GE recommended newer high thrust engines, the likely result would have been to throw the entire question open to another bidding contest with Rolls Royce and Pratt & Whitney being able to compete. Better to sell a mature product with an established profit margin than to risk a competition which might be lost.

It was becoming apparent throughout the '80s that the military's aging fleet of transport aircraft would need to be replaced. The C-17, built by McDonnell Douglas and later the Boeing company was chosen as the replacement aircraft.

Having been designed to be all things to all people in the airlift world, the final product ended up not doing any of those things particularly well. The problem is that an aircraft designed to be a strategic lifter, that is to take stuff across oceans at high altitude, makes for a lousy forward operating location aircraft capable of landing in a war zone on an unimproved runway.

In fact the aircraft had originally been designed to replace aging C-130 aircraft which are excellent intra-theatre aircraft. It was later decided that the C-141 would also need replacing which was a strategic inter-theater airlifter. The C-17 became a sort of Frankenstein to do both of these things previously done by two separate aircraft.

The aircraft was outfitted with Pratt & Whitney F117 engines which is a military variant of the commercial PW2000 engine used on airliners like the 757. In a unique and custom modification, the C-17 engines employ a directed flow thrust reverser to assist with short field landings. Again, this type of custom modification, not found on commercial aircraft, greatly increases the cost, reliability and weight of the engine. But that's not the interesting part.

The interesting part is that after the aircraft was delivered, the engines did not produce the required specific fuel consumption that had been promised. It was a gas hog. In fact, it was determined that the C-17 was not able to fly from California to Hawaii with a full cabin load because of the extra fuel needed.

This was eventually fixed, but at some cost. Extended range fuel tanks were fitted inside the cargo compartment at the wing root to add about 60,000 lbs of fuel capacity. If you see one at an airshow, walk inside and check it out. The tank hangs from the ceiling between the wings.

I could go on with additional stories about the B-1, B-2, and T-46 trainer aircraft but this post would never end. Suffice it to say that while the military procurement process resembles the legislative process in it's sausage making similarities, the military generally ends up with products that eventually are fixed to become quite useful.

Of course if you've really got to go, a $600 toilet seat is better than none at all.