The Aviation Adventures of Flat Mae


Hi there. My name is Flat Mae, and I'm a two dimensional projection of a REAL seven year old girl. I look just like her. Well almost. She's actually a bit bigger but I'm just as smart. Real Mae has to go to school, but I get to go everywhere!

As it turns out, I have an auntie and uncle who are real live airline pilots! My auntie flies for Gigantor Consolidated Airways and took me on a trip to Germany last week on a 777. Gosh, that's a BIG plane. That was a lot of fun.

This week my uncle who works for Air Eponymous Airlines, took me along for his trip all around the states. Boy, that was a lot of fun too! Here's how my trip with my uncle went!

Well first of all, we had a really good deal and didn't have to fly up to Chicago Sunday night to stay in his stinky old crash pad. That's because his trip had a late morning start and he got to sleep at home and fly up Monday morning in time to check in. It's the little things that count he said.

Well we flew up and checked in and then walked over to our gate. My but Chicago has a big airport and even has another one that's even bigger! They even have an airplane inside the airport which seems really weird. The sign says they found it at the bottom of a lake or something.


Today we're flying two flights to Orange County after first stopping in Denver. I do so love oranges. This is going to be great! 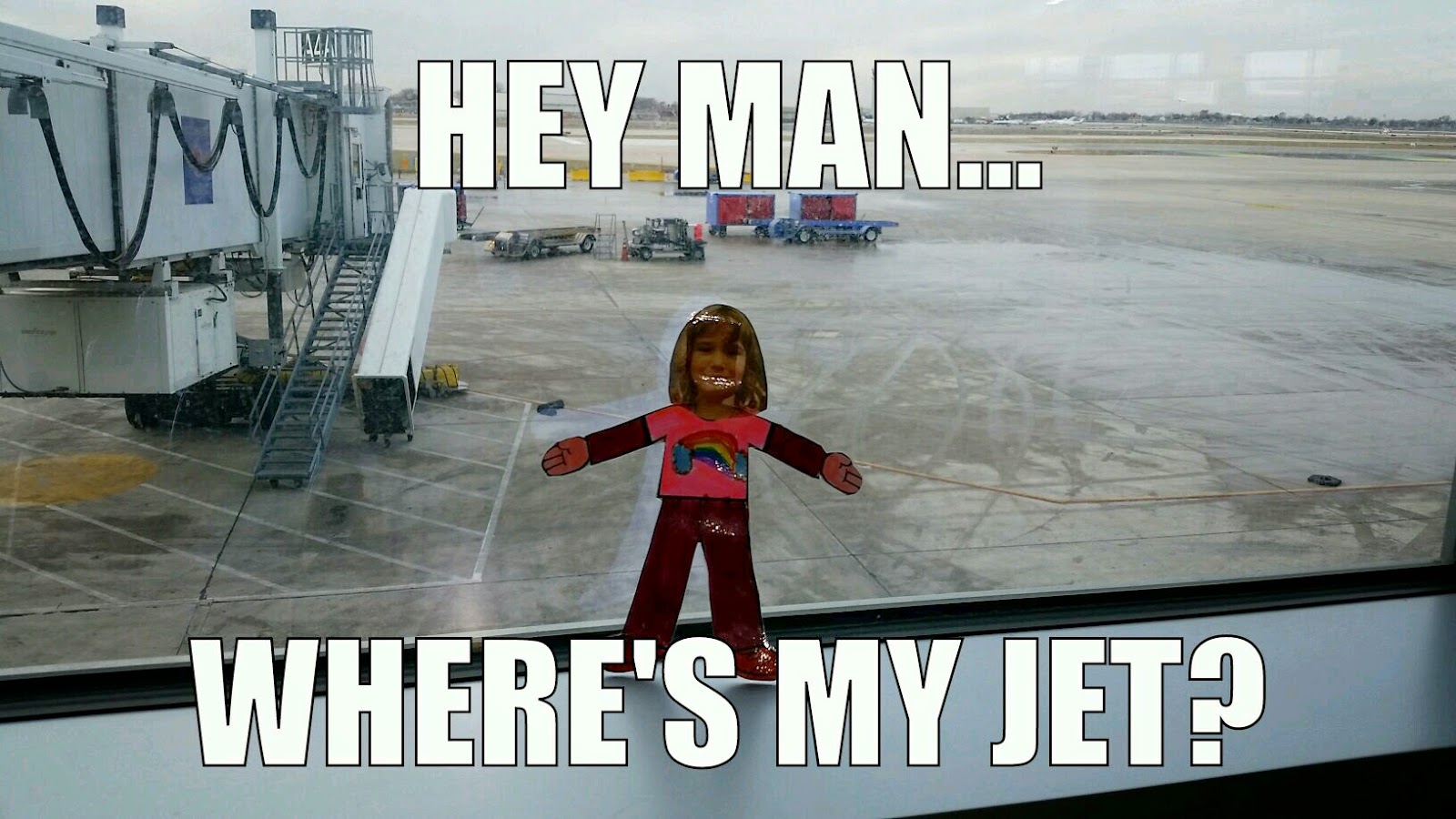 We get to our gate and there's no airplane! My uncle says it's ok because it hasn't arrived yet and we're early. I hope he's right because I am so excited!

It eventually shows up and we get started on all our preflight checks. We meet our copilot whose name is Chris. He seems nice. There sure are a lot of buttons up there. I hope they know what they all do! 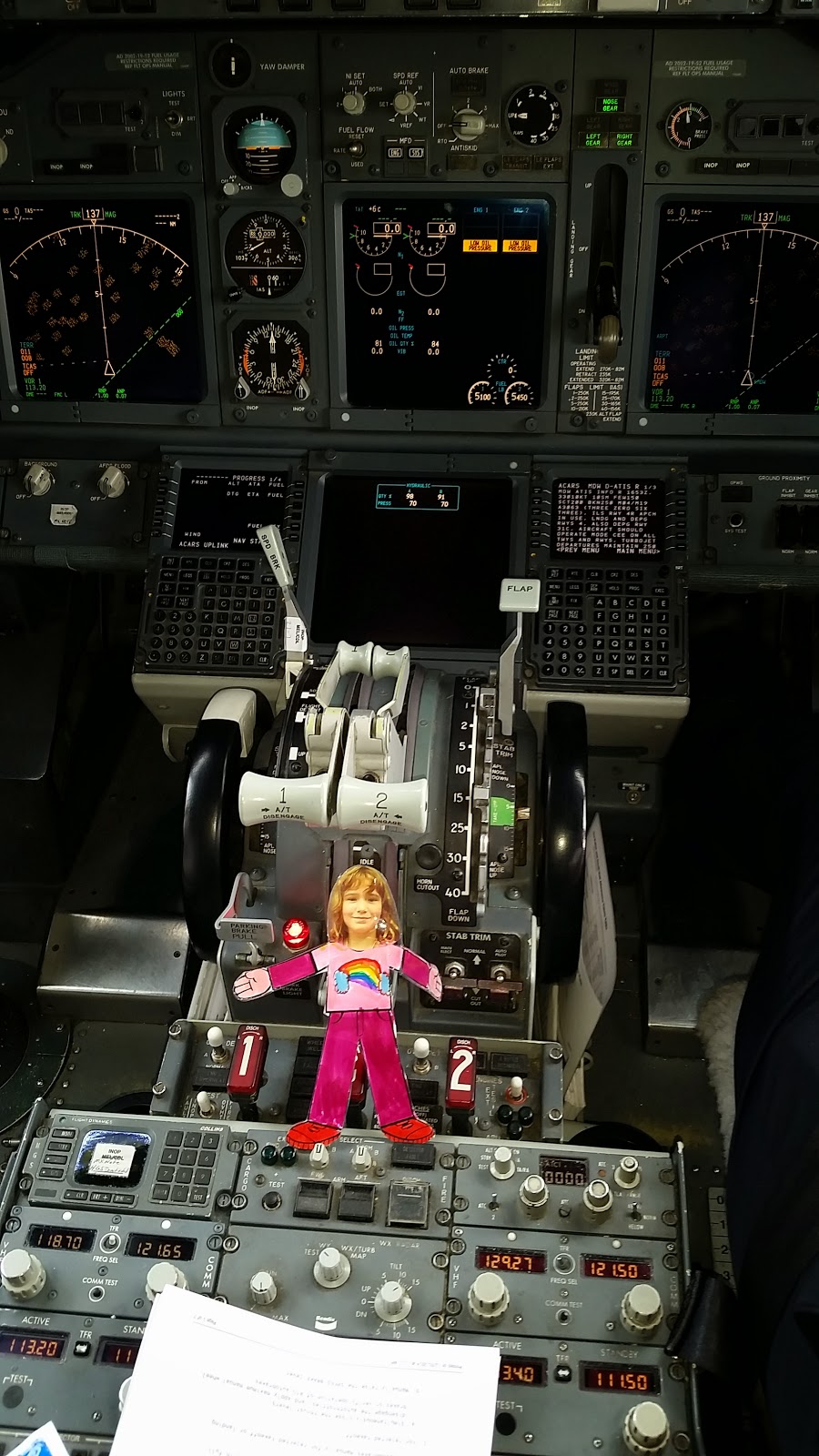 The takeoff was the most fun ever. We got going really fast and then just wooshed up into the air! All the houses got really small and I could even see cars driving around on the street and people walking around from way up high. We eventually go so high that I couldn't see any people any more. The next thing I know, we're inside a CLOUD! They're all white inside, just like the outside.

It was fun looking out the window. You can see everything. I waved at all the other airplanes going by but they went so fast I don't think they saw me.

We landed in Denver but they unloaded and loaded the plane so fast we didn't even have a chance to get off! And then just like that we're taking off again to Orange County.

Well we landed in Orange County and there were more pilots there waiting to take our airplane somewhere else. Bye, plane!

Now we have to wait for the hotel van to pick us up. The hotel is very nice and we have our own room. We meet Chris for dinner and order the seared ahi salad for dinner with a nice glass of Merlot. Yuck. Who can drink that stuff?

After dinner we relax a little bit and then it's time to brush our teeth, set two alarms and hit the sack. This part is a little bit tricky. The schedule that we printed out says our flight leaves at 0915 tomorrow morning but that is in central time zone. That makes it 0715 here in California. Our van time is an hour before that and we have to get up an hour before van time. I have to wash my hair and put on makeup. Just kidding...I don't wear makeup, silly.  So that makes the alarm time 0515. Ughh!

The alarm comes way too early! We get ready and head down to the lobby. 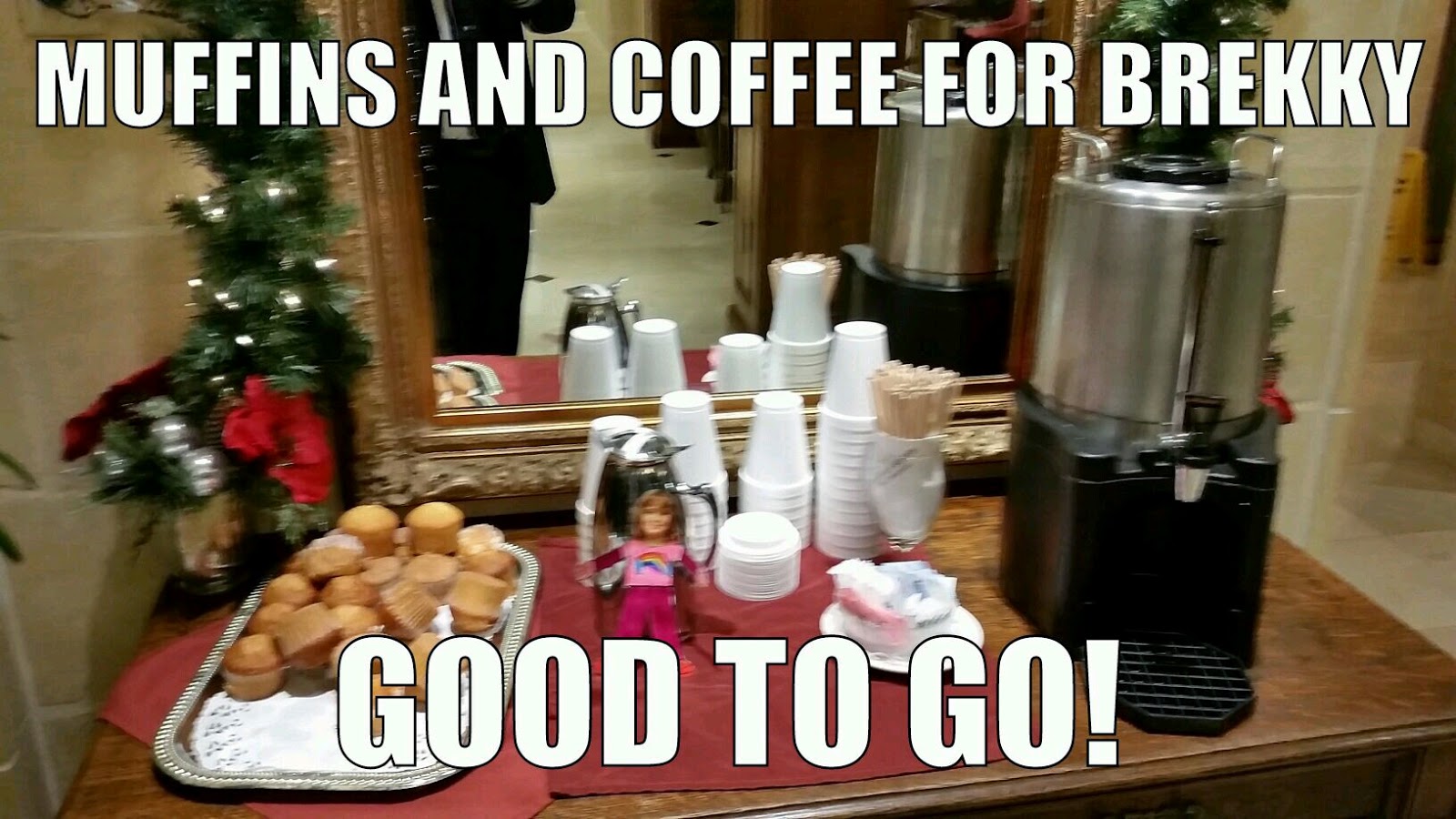 The kitchen hasn't opened yet but they do have some yummy muffins for us. I like this hotel. They have neat model ships everywhere and a Christmas tree in the lobby. 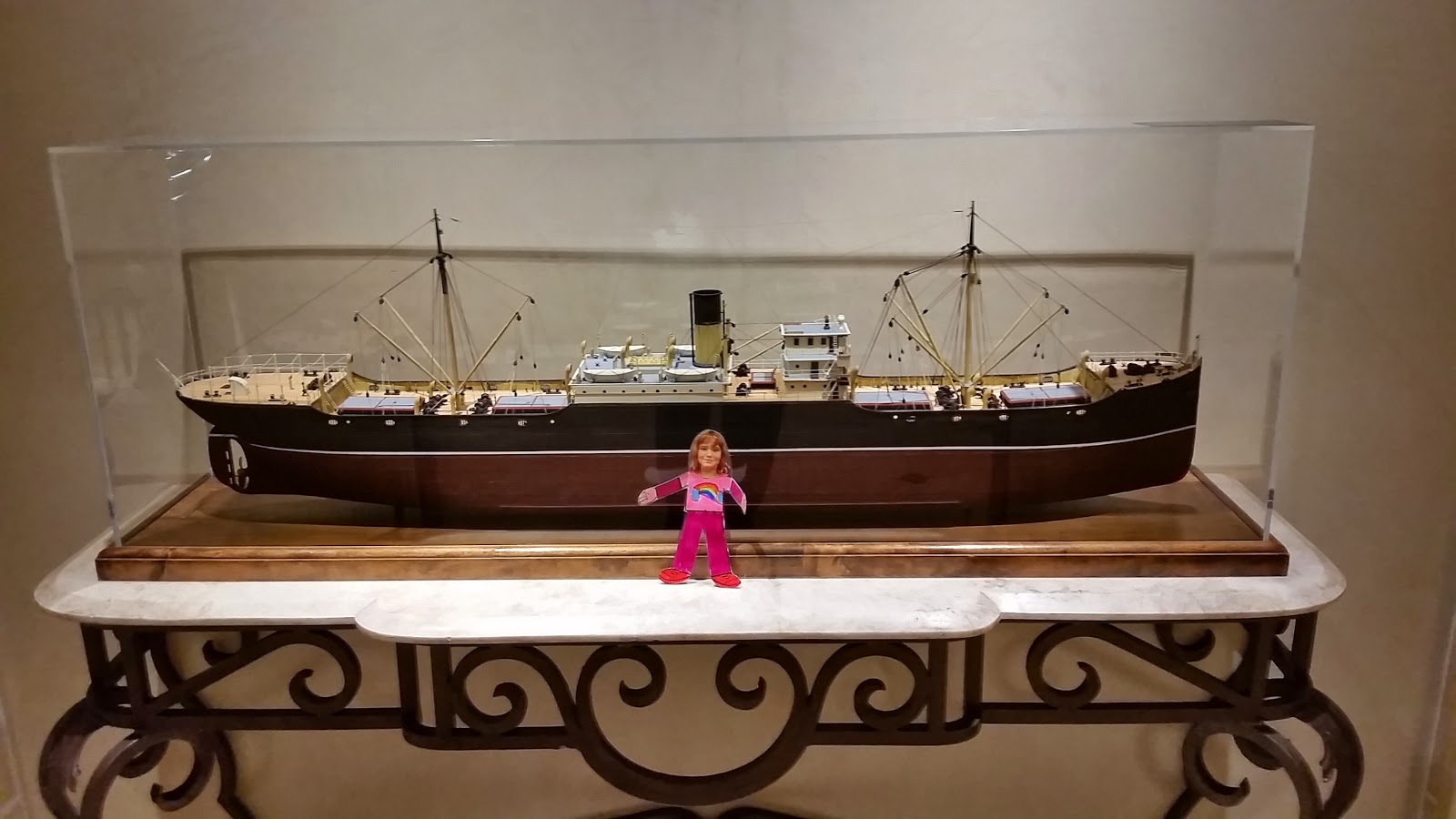 Well we get to the airplane and my uncle tells me I have to do the walkaround today. He tells me that we have to inspect the airplane to make sure it will fly. I sure hope it does fly. 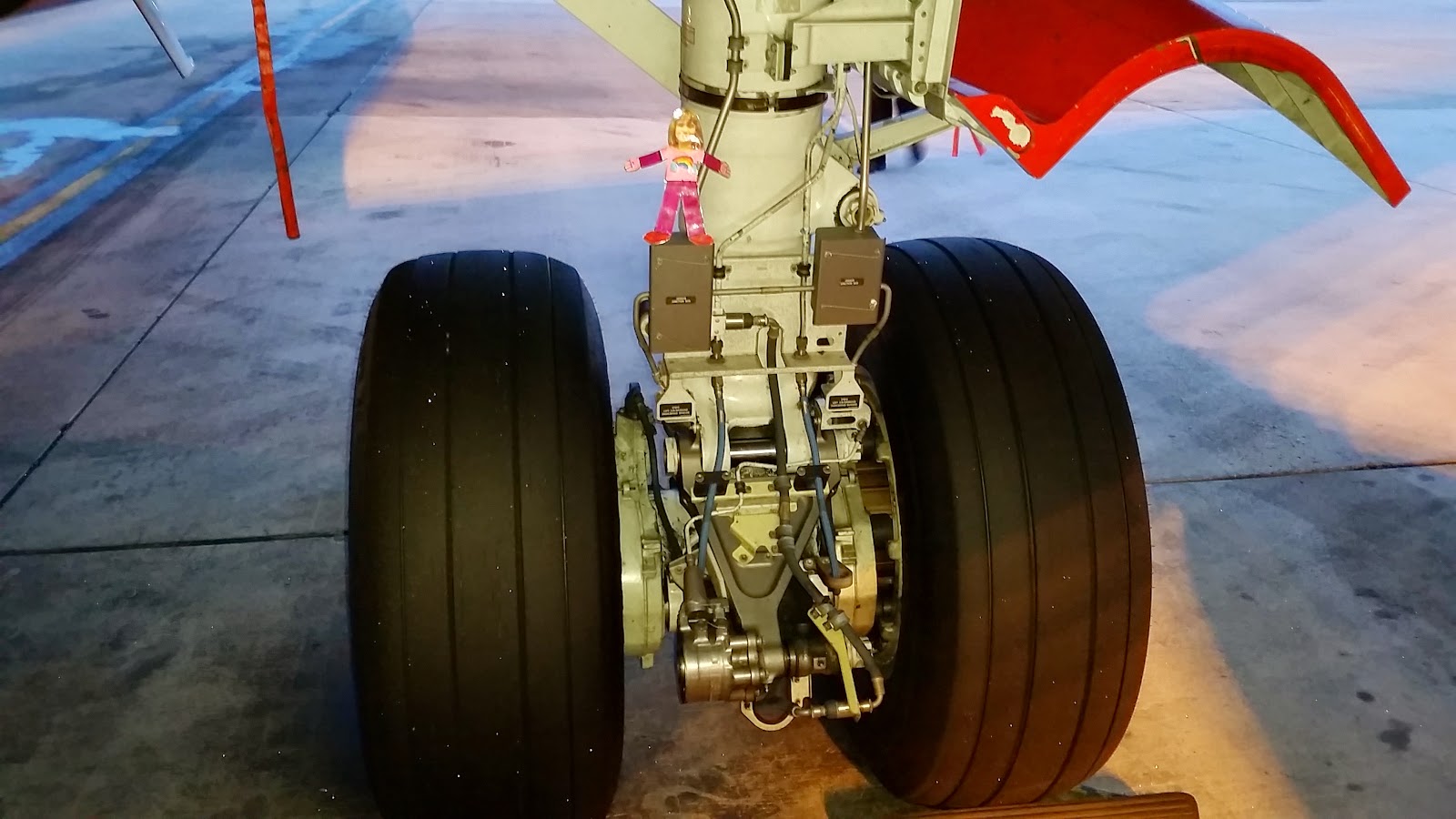 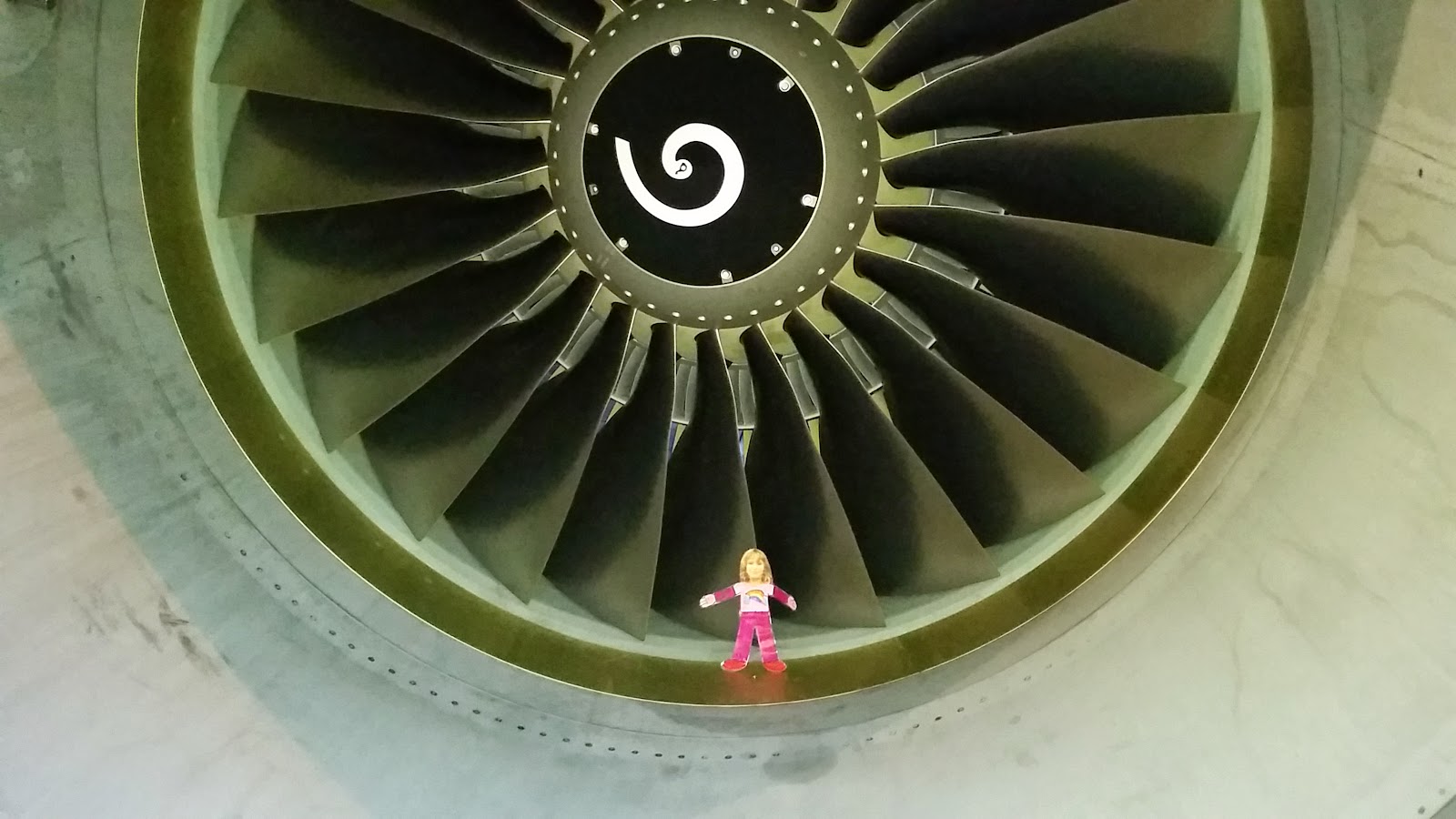 We look at the engines and the tires. They look ok to me. I guess.

Next we have to go into the wheel well. It's very dirty in there. I don't think I'd like to have to do that every day.

My uncle says I'd only have to do it for about 12 years. I'm only seven. That's forever! 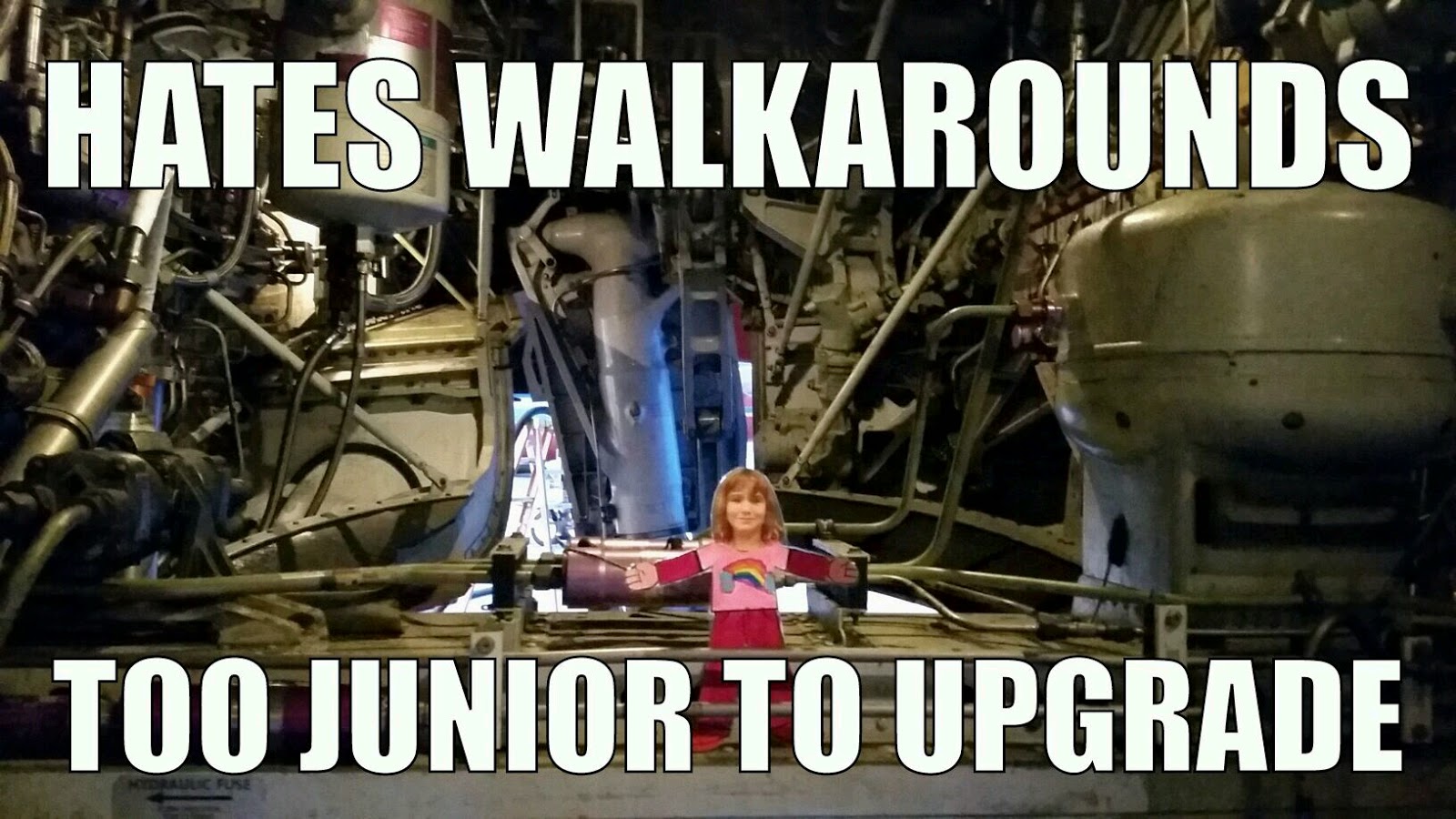 Ok, we got that done and get started. We're flying back to Denver today but it's supposed to be bumpy. My uncle says that there are mountain waves we have to cross. I don't know if I like the sound of that but he tells me it'll be fine.

My uncle doesn't look like he's having fun. He keeps talking to a man on the radio and the stewardesses in the back telling them to sit down. The wings look like they're flapping like a bird's. No one wants to have fun anymore.

We land back in Denver and this time we get to stay for a little while. We have to give this plane to other pilots and wait a few hours. I hope there's something good to eat here. The muffin wasn't much. 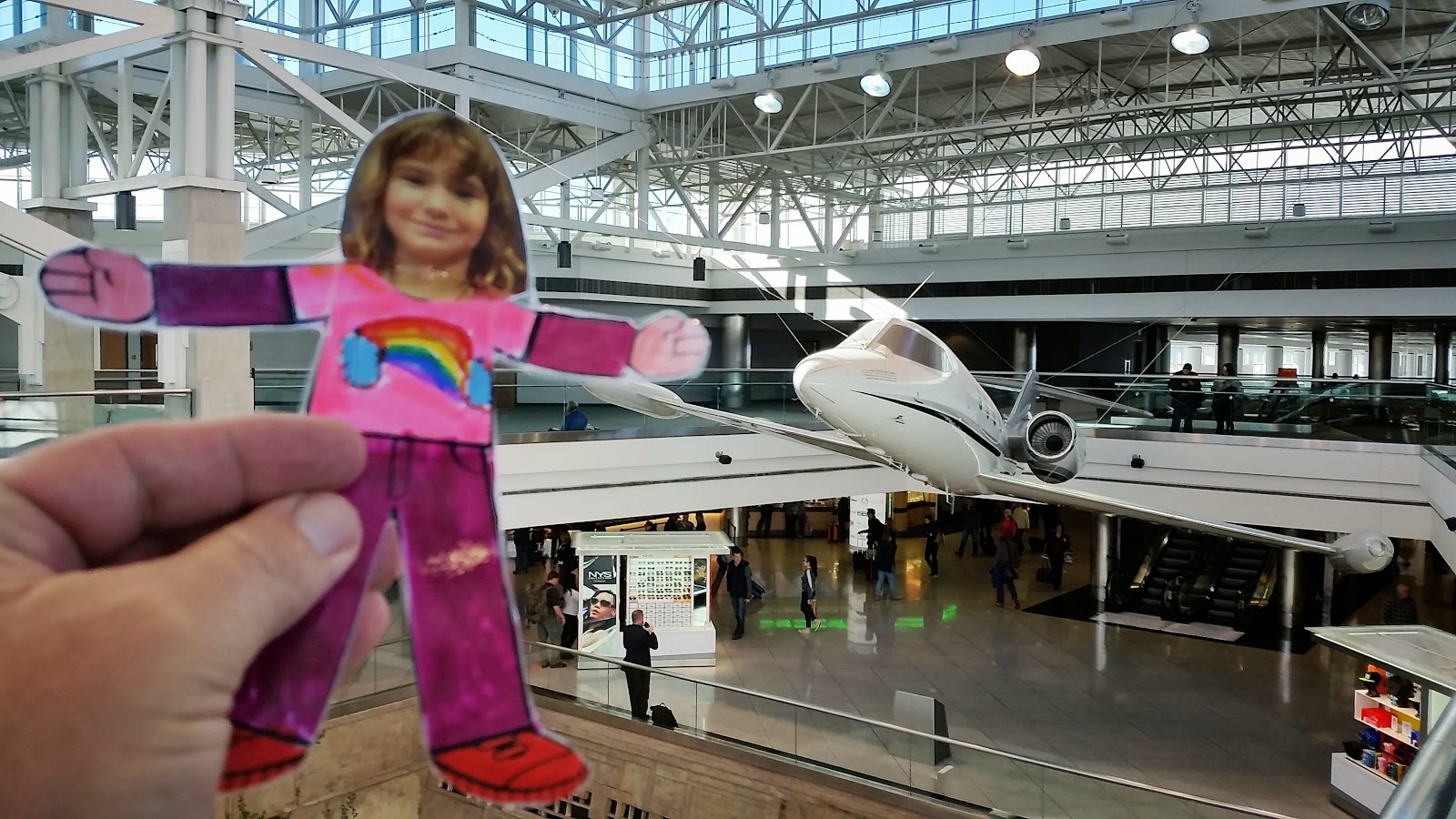 Denver is a really big airport and they even have a plane inside here too.

I'm beginning to see a pattern.


We hang out in the pilot lounge for a little while and watch some TV. Then we go and get a bowl of chile. It's six bucks. That's crazy! 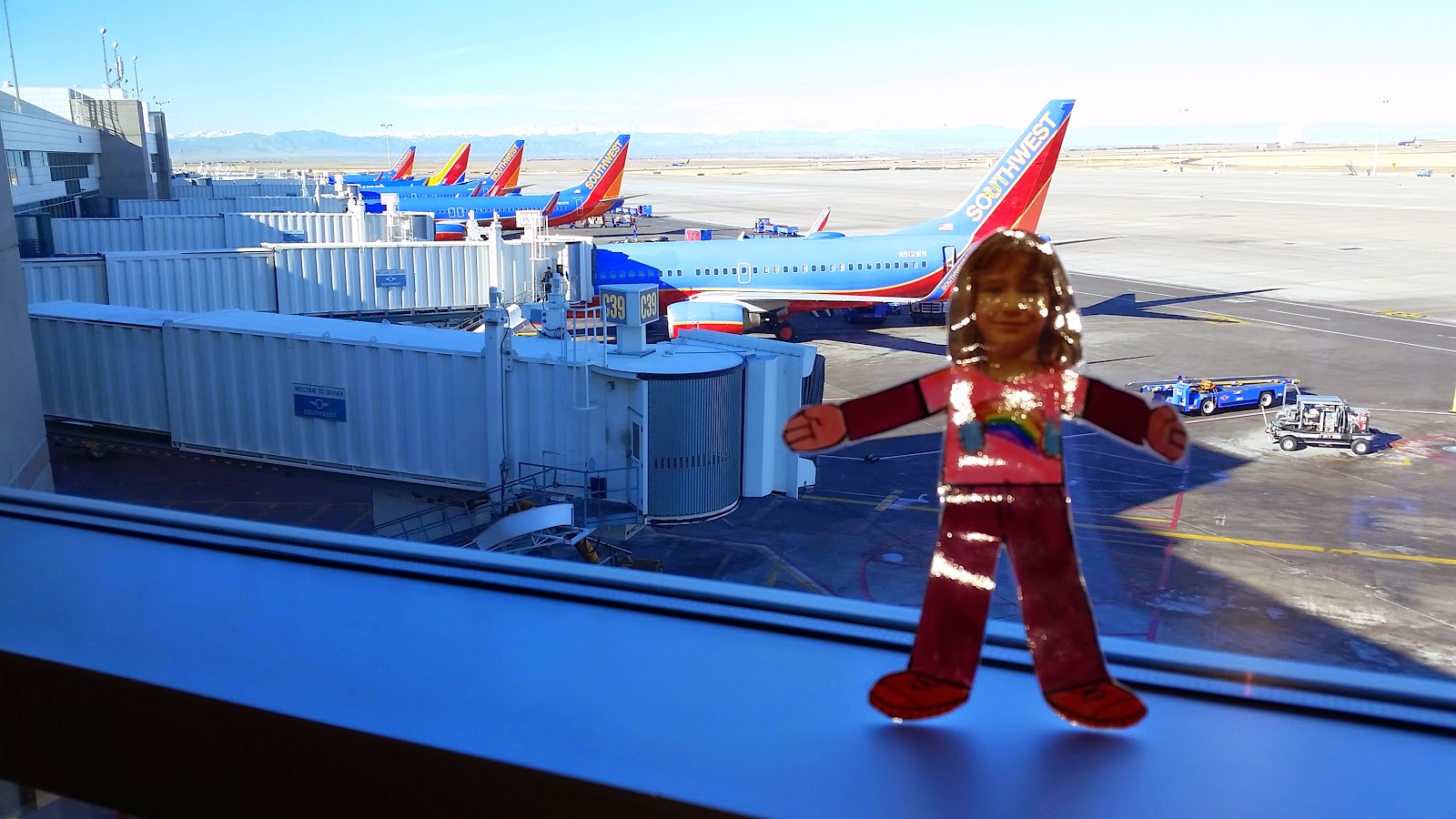 My uncle spends time on the telephone talking to a car mechanic back where he lives. He says my cousins are too rough on their car and now it needs brakes. And a timing belt. And a power steering pump. And new motor mounts. He doesn't seem happy.

Soon enough we have to go to a new gate and get a new plane. I don't have to go into that nasty wheel well but he lets me drive the pushback tug. 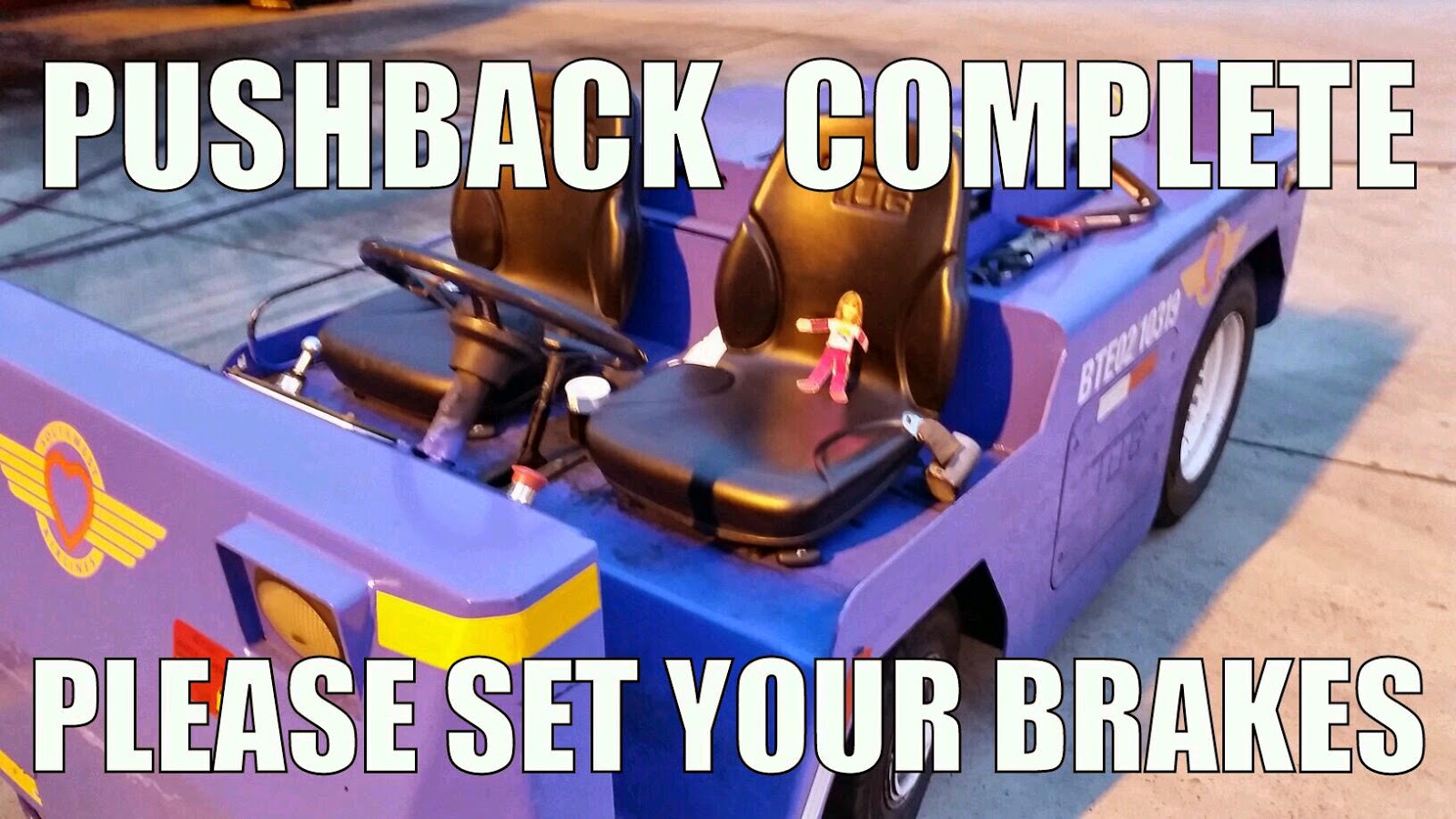 That is tons of fun and I didn't even hit any other airplanes!

Ok, we're off. This time to Detroit.

By the time we get to Detroit, it's dark. And a lot colder than California. Lucky for us the hotel van comes right away. This hotel is not as nice as the one in California but it's still ok.

We meet Chris for dinner and have the open face turkey sandwich. My uncle has been really wanting a turkey sandwich since all the ones from Thanksgiving were accidentally left on Grandma's kitchen table when he drove home. It's yummy.

After trying to read but falling asleep we set two alarms again only this time it's even earlier. Our schedule says we leave at 0505 which means we should get up at 0305. That's three in the morning! But it's still tricky as Detroit is in eastern time so we set the alarm for 0405.

The kitchen is also closed here when we leave the hotel but they have a bag with a pastry and an apple for us. It's still dark when we get up and even still dark when we take off, this time for Baltimore. The sun doesn't even begin to rise until we start to descend. 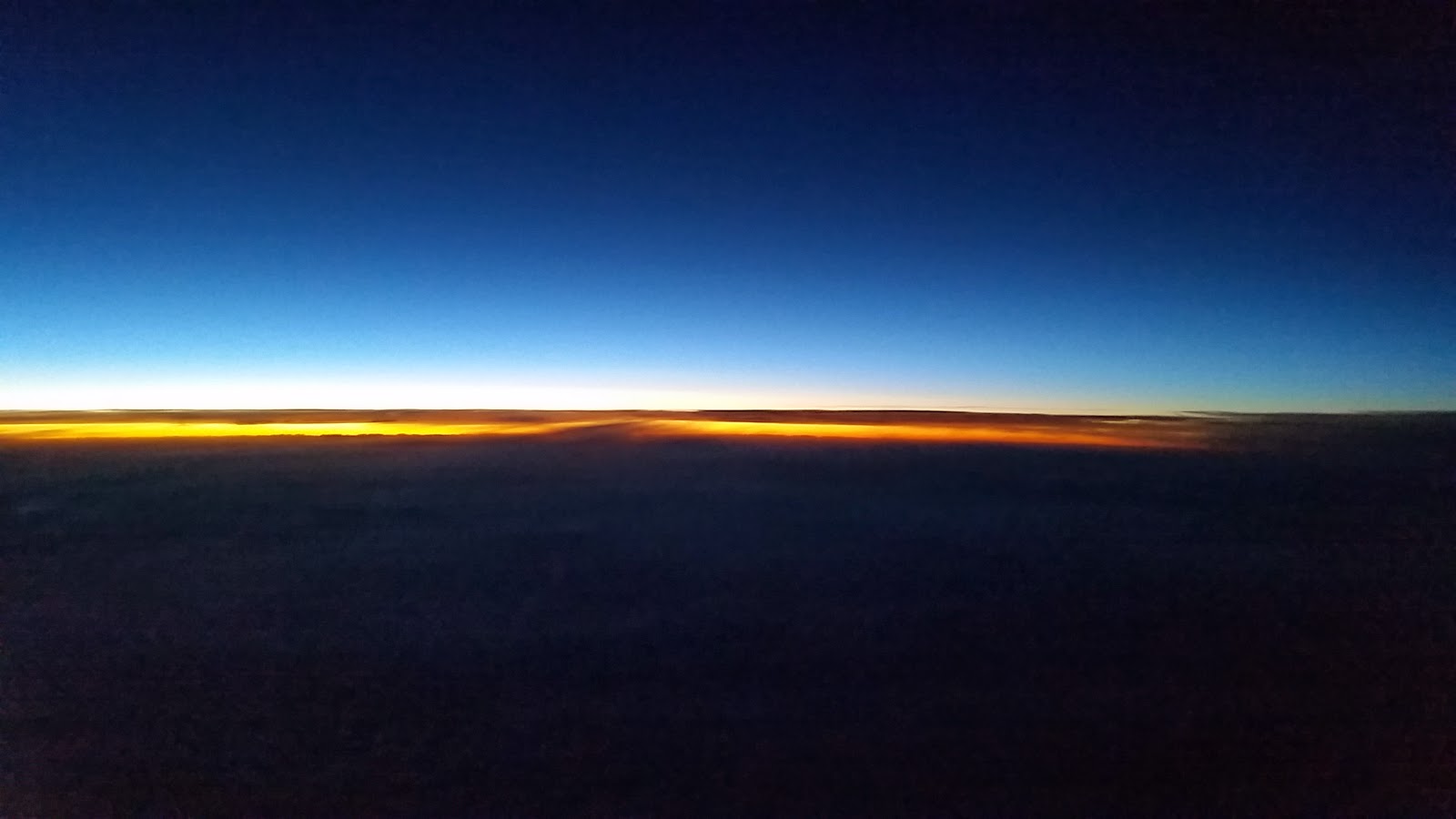 It's pretty when it starts to come up though.

We only had 40 people on the first leg but now in Baltimore they're filling us up to over 140 people. We're flying back to Detroit and then to Chicago and we'll be done.

Detroit looks just like we left it a few hours earlier but some ice clung to the wings as we came through the clouds so a truck has to squirt us with stuff to melt the ice.

We sure don't want to waste any time now because we all want to get home. Chris has only an hour before his commuter flight leaves for Cleveland, and Steve, one of the flight attendants, is running for a plane to Florida.

It all goes pretty smoothly and we land on time even with 80 or so knots of headwind. I don't even know what a knot of wind is but it sounds important.

More pilots meet us to take our plane back to California and we're free to go. Our commuter flight doesn't leave for three hours so we go to the lounge to do some online training. Boy is that boring!
Maybe the real Mae has a better deal. 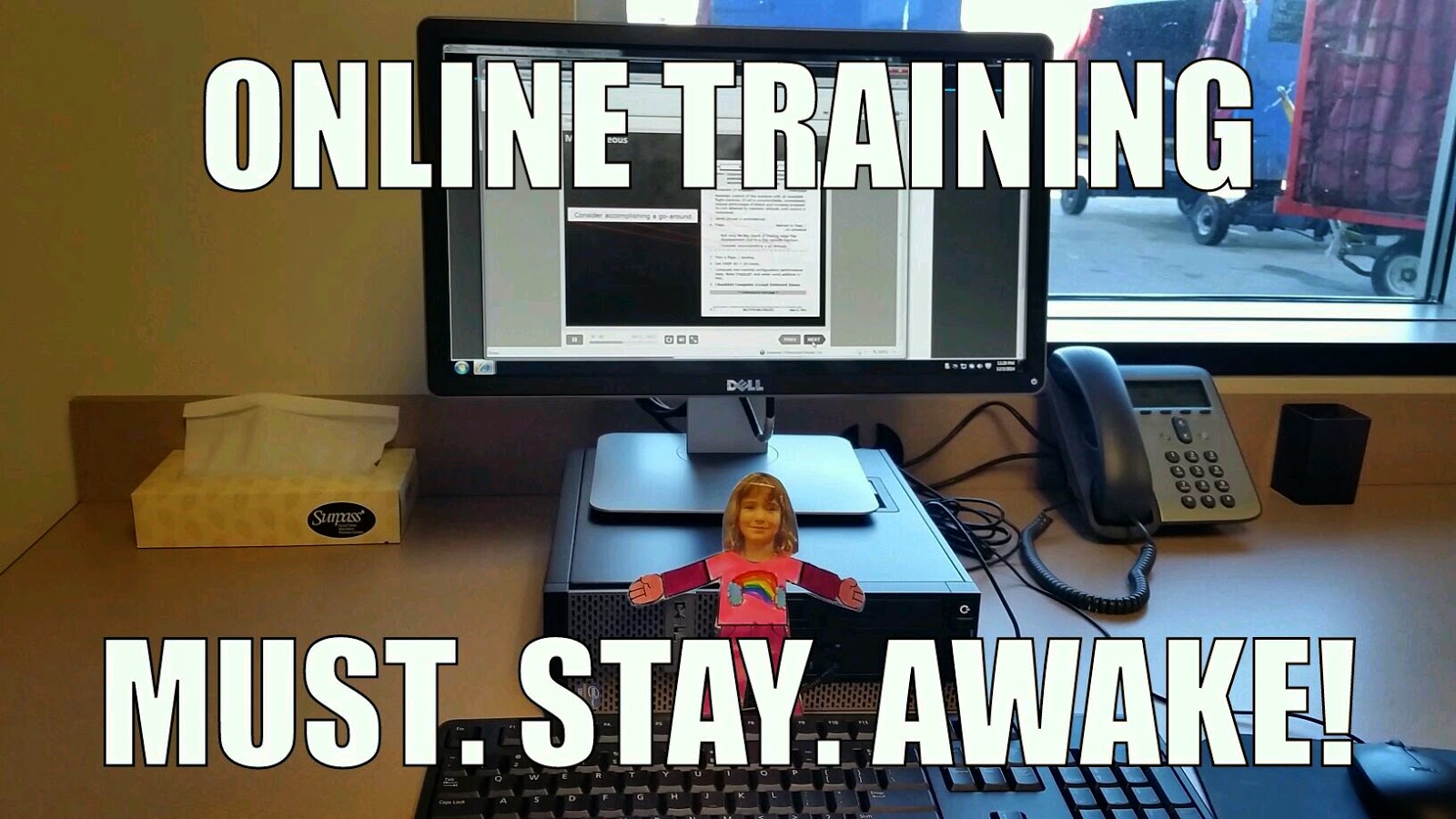 After getting up so early, it is tough to stay awake while learning about new checklists.

The apple didn't last very long and we're hungry but we have to decide where to eat. There are so many good choices here in Chicago! 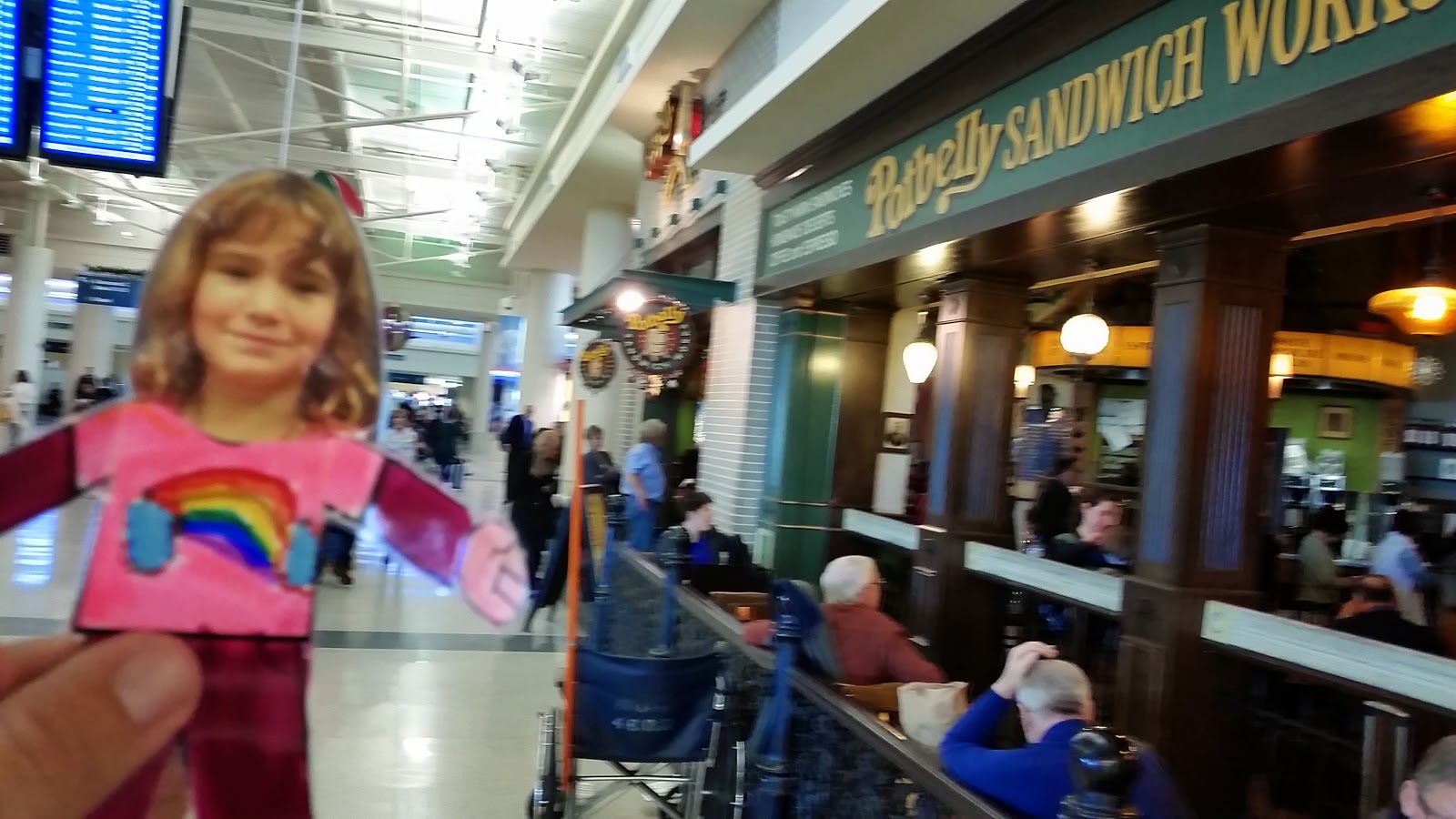 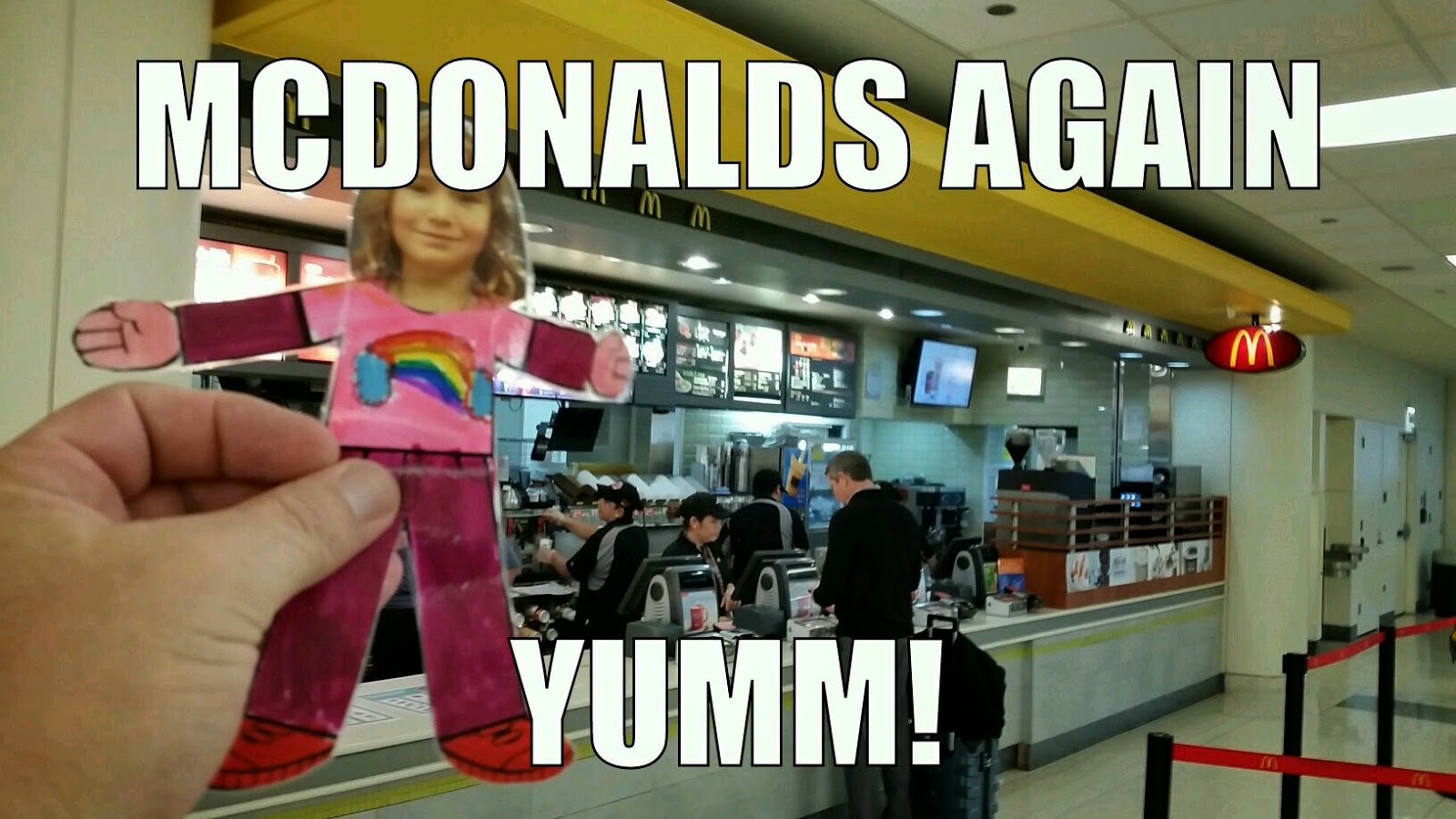 There's McDonalds which is ok but also Potbelly's. Their sandwiches are great but the line is out the door. We decide to wait in line at Potbelly's and it was great.

Soon enough though it's time to go. We go to our gate and luckily there are seats available on our plane. We get to go home! 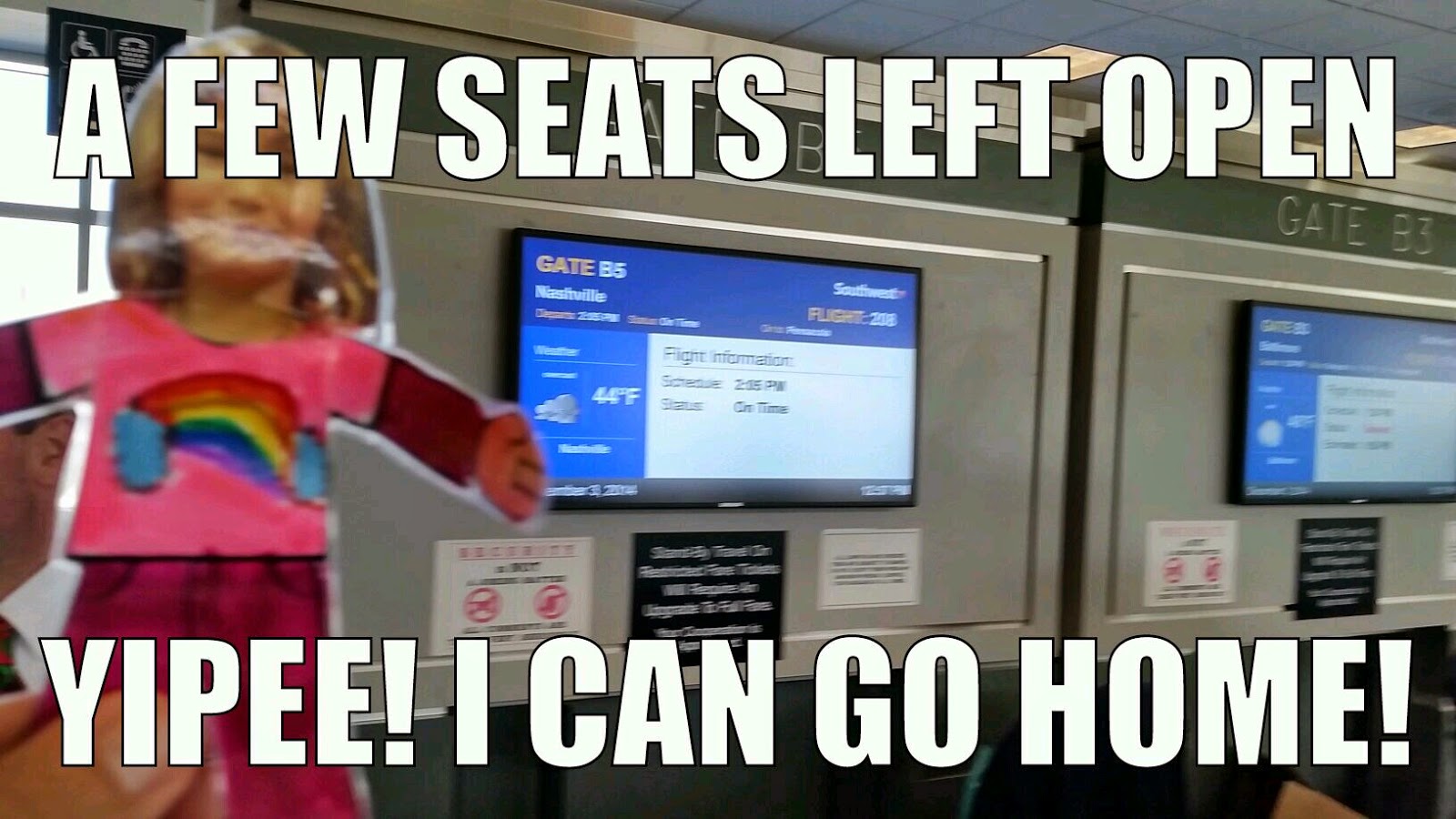 We get on board and settle in for the ride. Our only concern now is that the Kindle doesn't die. We forgot to charge it last night. 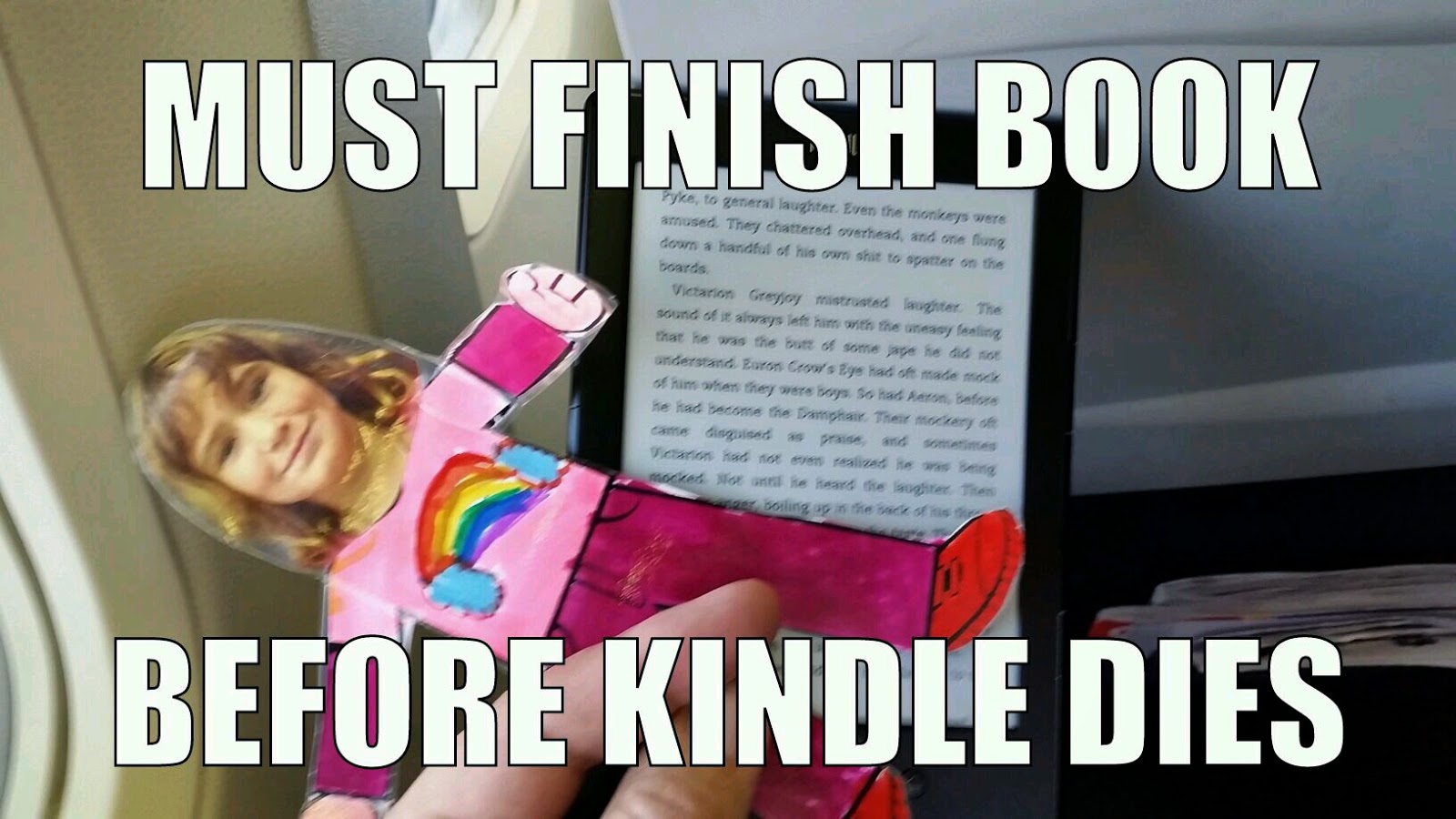 A short hour and 20 minutes later and we are back home. Since I'm actually a princess, I get princess parking and my chariot (actually a pickup truck) is waiting for us. 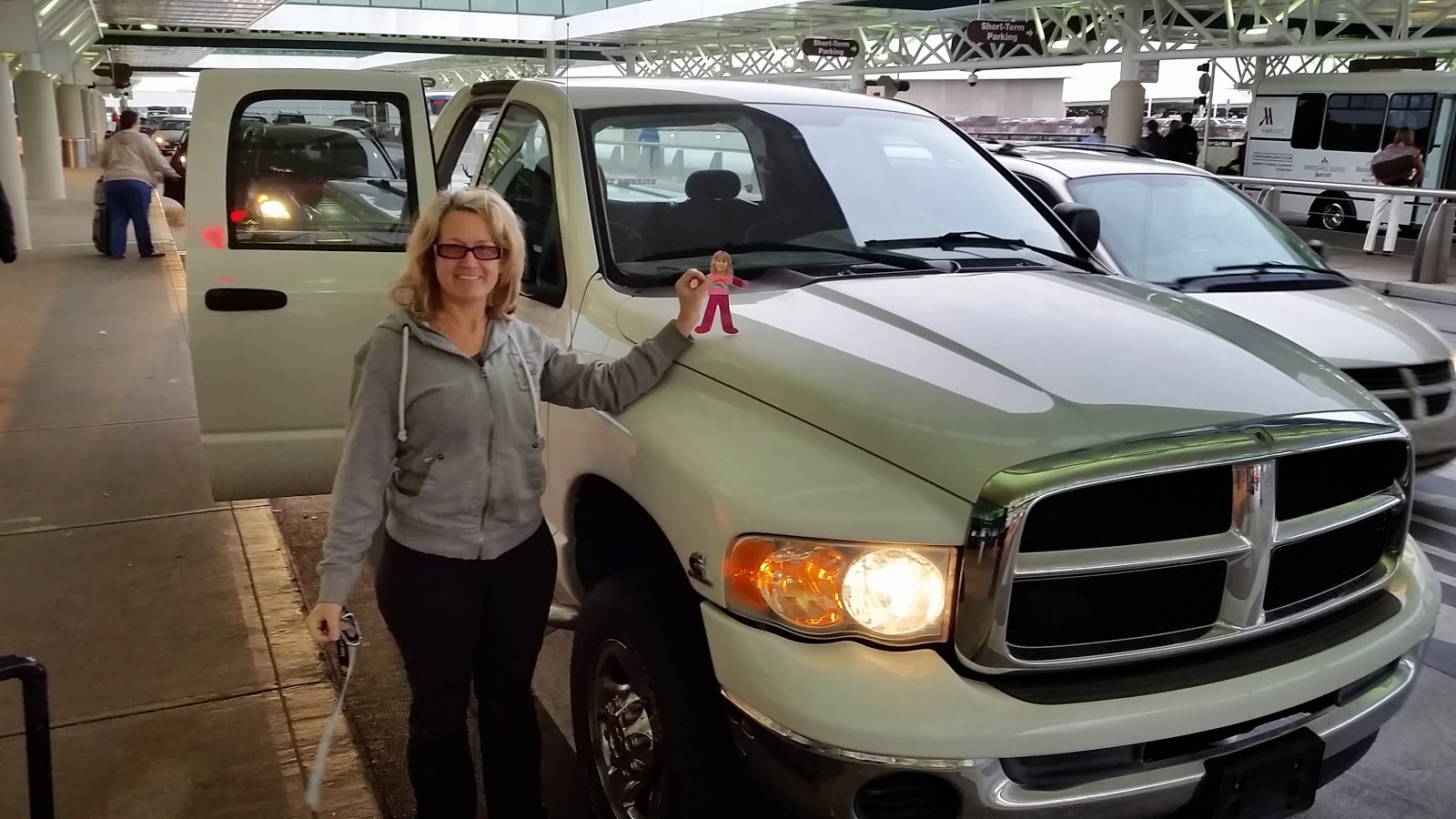 It's been a fun trip but boy am I tired! My uncle says it still beats working for a living, though. I'm not so sure.