A Bad Day at Work 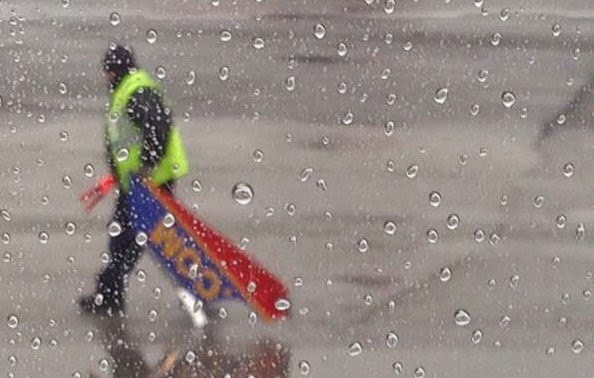 As I mentioned in a recent post, an old pilot saying cautions that it's better to die than to look bad. What you see here comes under the heading of looking bad. Hit another airplane while taxiing and you are probably set up for one of the worst days of your professional career. And most of the pain will be self inflicted.

Of course there will be pain inflicted by your chief pilot, your crew and passengers and probably also the FAA, but you will be the one leading the charge to your own auto-da-fé. For in the piloting world, there is simply no excuse for taxiing your airplane into another solid object. And you know this.

I still recall a flight instructor from my distant past making the point that there is really no such thing as a taxi accident. There are only "taxi-on-purposes" for while you are on the ground, you really only have one job: don't hit anything. And stay on the pavement. Okay, two.

And there are lots of things out there that are going to try to get in your way. There are baggage carts, tugs, provisioning trucks, jetways, and of course other airplanes. Most tug drivers are reincarnated kamikaze pilots as they will gladly cut in front of a taxiing airliner with hardly a glance.

Some things such as light poles aren't even trying to get in your way but occasionally make you aware of their presence. One was recently clipped off in Denver, but one of the more memorable events I recall was an encounter between a C-5 military transport and a misplaced light pole on a new taxiway in Oklahoma.

Yes you read that correctly. The contractor who painted the lines on the taxiway was different than the contractor who installed the lighting, and neglected to measure the distance between the centerline of the taxiway and the pole. The first poor schmuck to taxi into the area, while solidly on centerline where he was supposed to be, hit the pole. The pilot of course was blamed and summarily shot.

I myself recently had a close encounter while parking a jet. As you pull up to the parking spot, you will see the jetway pass by your left field of view but you must watch and obey the marshaller, the guy with the wands. This particular time, I noticed the jetway go past but he kept motioning me forward. It turns out he was parking me on a painted spot designated for a larger airplane. Had I kept going forward, my left engine would have contacted the jetway. Luckily I stopped before we bent any metal. Trust no one.

Another good one was when an AWACS aircraft, a Boeing 707, was found to have some damage on its wingtip upon return from an overseas deployment. A worldwide search finally found some matching damage on a hangar at Yokota AB outside Tokyo.

A buddy of mine back in the 312th Airlift Squadron had an even closer encounter while taxiing his C-5 out of parking on Okinawa. In what might be described as either extraordinarily good or bad luck, his wingtip just barely grazed the nose of another parked C-5 resulting in only a paint transfer. That was some fancy driving. He was let off lightly with only the loss of one or two fingers as punishment.

It's Not That Hard

You may now be thinking that pilots are either extremely careless or that taxiing is harder than it looks. While neither of these is particularly true, taxiing is one of those human endeavors which while deceptively easy, can brook no error. None.

Think of it like parallel parking where there can be absolutely no contact between your car and other cars nor can your tires hit the curb. There will be a point where you think you're probably ok but not really sure so you back another inch and feel the slight lurch as your bumper hits the car behind. You could've gotten out of the car to walk back and look but you didn't.

That is the temptation when your wing looks really close to something but you can't really tell. The problem is there are no bumpers or curb feelers on airplanes. Any contact means probably tens of thousands of dollars of repairs, cancelled flights and headaches.

Unless your wing is obviously clear of other objects, it isn't. Humans are just bad judges of distance between two far objects. And while other pilots may wish to take chances while passing, you'll want to protect yourself from the careless. I learned this lesson on one of my very first trips as a captain.

Way back in the mists of time, a very young and green captain operating one of his first left seat trips from San Francisco to Phoenix happened to have an older and wisened pilot in his jumpseat. This fellow was an American but was flying for an overseas airline at the time. Upon landing in Phoenix, we were taxiing into our gate when there appeared a plane heading the opposite direction.

That plane had been given instructions to wait for us to turn into our gate and then to pass behind us to the outer taxiway. This guy however didn't want to wait and kept coming hoping to squeeze around us. It was at this point I heard my jumpseater say, "Captain, set your brake."

The other plane passed uneventfully, though how close was anyone's guess. My guest explained that had he hit us, there would be no question as to who had hit whom as the flight data recorder would show my parking brake as set. It's a lesson I've never forgotten.