Do I Talk Too Much? A Primer on Airline PA Announcements 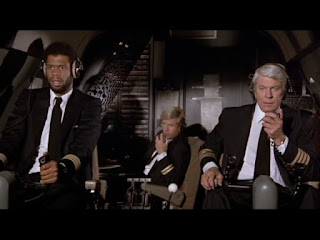 The chapter in Tom Wolfe's novel, The Right Stuff, which introduces us to Chuck Yeager, starts with this vignette:

Anyone who travels very much on airlines in the United States soon gets to know the voice of the airline pilot—coming over the intercom with a particular drawl, a particular folksiness, a particular down-home calmness that is so exaggerated it begins to parody itself (nevertheless!-it's reassuring) the voice that tells you, as the airliner is caught in thunderheads and goes bolting up and down a thousand feet at a single gulp, to check your seat belts because "it might get a little choppy"...


Wolfe went on to describe how that drawl, which characterizes the "pilot voice", had its genesis in Chuck Yeager's West Virginia cool-as-a-cucumber mein and delivery.

That southern drawl style of voice can still occasionally be heard over an airline PA, but it seems to have been eclipsed in recent years by the nondescript mid-Atlantic patois of most television news anchors. And that is too bad. A certain cachet has been lost in my opinion, but then again, a fake accent is probably worse than no accent.

My real problem with airline PA announcements, however, has nothing to do with the delivery, but rather the content and timeliness. We actually do talk too much when we should probably shut up and not enough when something needs to be said. Let me explain:

We are encouraged to give an opening PA to introduce ourselves and to give some information about the flight. My problem starts right away when pilots introduce themselves using first names only such as  "Bob and Tom". Perhaps I'm just old school, but when I hear that, I can't help but think I've tapped into the Wiggles channel, or perhaps wandered into a birthday party at a Chuck E. Cheese joint. Our informality infection has progressed just a bit far. Professionals should try to look and sound the part.

After the introduction comes a several minute soliloquy about the length of the flight, the filed altitude, the expected ride enroute, the destination weather, and those super gals and guys serving you in the back. Perhaps there was a time in years past when this information was not publicly available to anyone who cared to know, but that time has long since passed. Nearly all that information is now easily available on the iPad that every passenger will now have to put down while Captain America, er, Bob, rambles on for interminable minutes.

Opening PAs should be short, to the point, and only offer information that is not already available through the internet or the airplane's entertainment center. If the destination weather must be given, "partly cloudy and breezy" will suffice rather than well, folks, there's a scattered layer at 3000 ft and a broken layer at 12,000 ft with 8 miles of visibility and the winds at 320 degrees at 8 gust 15 knots. Passengers' heads often cock when hearing such details much in the same way as your dog's head does when you try to explain the theory of relativity. Passengers aren't trained in pilot jargon.

Silence is Not Always Golden


Now if things are going to be out of the ordinary, such as being so turbulent that the flight attendants won't be getting out of their seats, or there's an ATC departure delay, then that is worth passing along. This brings us to the times when something needs to be said and yet only golden silence prevails. If the push time is 0900 and it's, say, 0905 and we haven't pushed, a PA should be made to inform the customers that, yes, we know that we're now late, and here's the reason, and here, also, is when we expect to be moving. Not announcing those things makes it seem like the pilots are hoping that no one notices. They do.

This is especially important during lengthy ATC or maintenance delays. If we're stuck at the gate for an extended period of time, I personally like to give an update every 10 to 15 minutes. This won't be a long announcement but rather something along the lines of yes, the mechanics are still working the problem, but we expect that we will eventually be under way in so many minutes.

Many pilots prefer to use euphemisms when describing things like turbulence or maintenance issues. I personally prefer an honest but not too detailed description of weather and mechanical issues. If we're expecting moderate turbulence, I'll use that term instead of "really bumpy". If there is a line of thunderstorms ahead, I'll say that. If those terms scramble someone's eggs, perhaps they should not be flying.

Likewise, if we have a mechanical issue, I'll mention the system that is affected without going into unnecessary detail. "Folks, we have an electrical problem" is probably better understood rather than the number 2 transformer/rectifier is showing zero amperage (usually followed by a detailed discussion of what a T/R even is).

One thing to be careful about concerning maintenance announcements is the subject of deferrals. Most people expect that their airplane is perfectly functional all the time and will likely not understand the concept of redundant systems and deferred maintenance. In those cases, I'll usually announce that the mechanic has the problem squared away and we'll be departing soon.

Is there anything more annoying than modern day customer care speak? Endless apologies followed by assurances that your experience and well being are of the highest concern have become a ubiquitous soundtrack to life in our deracinated corporate infused existence. A bit of real talk is a great antidote and is usually well appreciated by people trapped in an aluminum tube for extended periods of time.

If we (the airline) screwed something up, I like to say so, but if that's not the case, I'll say that as well such as "our good friends at the FAA have instituted a flow control program".  Another annoying tic that I hear occasionally on the PA is the airing of dirty internal laundry such as "well, folks, we're ready to go but the ground ops folks are dragging their feet getting the plane serviced." When speaking to customers, you are the voice of the corporation. They don't know or care about internecine tribal spats.

Admittedly, most of the announcements you hear on an airliner come from the flight attendants. Cut them some slack because most of what they say is mandated by either the corporation or the FAA. And I wholly approve of pre-recorded safety videos that are now becoming common. I'd much rather watch a professionally produced safety video than listen to a harried flight attendant rush through a safety demo for the fourth time that day.  Other announcements such as the mandatory seatbelt sign notification are also being automated on newer aircraft.

Humor of course always has its place in airline PAs, but like wearing Spandex, only certain people can pull it off. Unfortunately, most of those that do, probably shouldn't. Perhaps there should be an audition where aspiring comedians can go through their schtick and get feedback before inflicting their routine on a captive public.

Airline PAs should convey valuable and timely information to customers who have no other means of gaining that information. Redundant, rambling, or lengthy announcements merely add insult to the injury of modern air travel. And of course, don't forget to bring your noise cancelling headset.

Email ThisBlogThis!Share to TwitterShare to FacebookShare to Pinterest
Filed under: airlines, safety