A Summer of Profits for Airlines but of Discontent for Labor 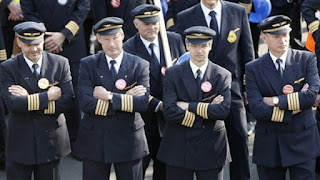 Second quarter earnings reports are out and there's quite a bit of good news for airlines. This latest earnings season has the big four airlines swimming in black ink. On the other hand, airline labor groups are not quite feeling the love they feel they deserve. Delta's pilots just voted down a tentative agreement for a new contract while Southwest's flight attendants also voted down their recently reached tentative agreement. So what's going on?

Well, lets first take a look at the haul that the airlines brought in this past quarter. United weighed in with an all time record profit of $1.2 billion and this was on reduced revenue. Southwest, the smallest of the "big four", increased their profit 31% to a record $608 million. American Airlines pocketed a record $1.7 billion, while Delta brought home a healthy $1.49 billion on $10.71 billion of revenue.

These airlines are so hip deep in cash that they don't know what to do with it all. The airlines have been under the gun to not flood the market with capacity which in the past has always ended up in brutal fare wars and bankruptcies. Since expansion is mostly off the table, returning the loot to investors through stock buybacks is the order of the day.


Yes, times are flush for airlines but airline labor groups are now angling for a larger piece of that pie. As mentioned above, Delta's pilots recently voted down their tentative agreement with the carrier. This was the first time that the pilots at Delta had ever defeated a proposed contract. Chief among the complaints were reductions in profit sharing, changes in sick leave policy and a wish to be made whole after a decade of stagnation at the carrier, especially in light of record profits.

Southwest's flight attendants also voted down their tentative agreement in a lopsided 87% negative vote. The issues centered mostly around work rules which would increase the maximum duty day to 12 hours and minimum work rules which would affect vacation pay. Southwest is still in negotiations with its pilots who recently formed a strike committee and also its baggage loaders.

The pilots at American and USAir voted last January to approve their new contract with the newly combined carrier. This agreement included hefty pay raises over and above post 9/11 concession wages, but they are still looking for improvements. From the APA website:

APA will now focus on further engagement with American Airlines management to address ongoing shortcomings in our contract. Our total compensation will still trail industry-leader Delta, while work rules affecting our pilots’ quality of life need meaningful improvement. There’s a lot of work remaining to achieve the industry-leading contract our pilots deserve.


United's pilots likewise approved their merger contract back in 2013 which included pay increases over bankruptcy contract wages dating from the early 2000's. While the United pilot's contract doesn't become amendable until 2017, rest assured that they will be targeting "industry leading" wages.

Will There Be a Strike?

Unlike most unionized labor forces in the country, airline labor groups and their collective bargaining agreements are regulated under a very old law known as the Railway Labor Act (RLA). The RLA, passed in 1926, doesn't allow for labor contracts to "expire" but for them to become "amendable". This means that on the amendable date, the labor agreement in force just continues until a new agreement is reached. The animus behind this law is that it was viewed that a shutdown of the railways was too economically harmful and therefore work stoppages must be avoided at all cost.

There is a very specific series of events that must occur before any strike can occur under the RLA. The first step is mediation followed by a declared impasse. Once an impasse is declared, a 30 day cooling off period must be observed and only then may a labor group or company engage in "self help" which means a lockout or a strike. No current disputes are even close to any of this happening. So no, it is highly unlikely that there will be any airline strike. Keep in mind that there is always quite a bit of posturing by both labor groups and management in these affairs.

The Kabuki dance between labor unions and management will continue. Agreements will eventually be reached and everyone will get on with their jobs. It's Great Circle of Life stuff.

As far as the specific pilot contracts are concerned, my belief is that airline managements will eventually have to open their checkbooks to attract a dwindling number of new pilots to replace the tsunami of retiring pilots. Regional pilots looking for their first major carrier jobs are in the catbird seat, and have the luxury of choosing the major airline with the best pay and best prospects for a quick upgrade to captain.

As captain upgrade is driven by retirements (and growth, which is not happening), looking for the airline with the best upgrade prospects means finding the airline with the most retirements. Currently all three of the largest major airlines, American, United and Delta have huge numbers of upcoming retirements. Replacing these pilots will drive wage demands. Southwest, which has a relatively young pilot force, and hence upgrade times topping 15 years, may have a specific challenge attracting new talent.

I don't personally get too excited about union politics as things always seem to have a way of sorting themselves out.