When Flying, Be Ready to Expect the Unexpected 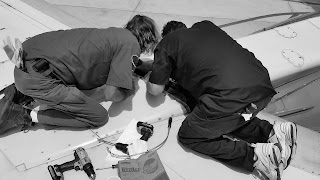 I used a somewhat unusual construction in the title of this post to illustrate a point about the attitude pilots need to take while on the job. What I mean by this is that pilots are not expected to be sitting on the edge of their chairs for every second of every day waiting for something to go wrong. That would be simply exhausting. Rather, pilots should be ready to consider that when things seem amiss, the airplane may be keeping a secret.

Let me give you an example which recently happened to me er, my buddy Joe, as he tells it:

About an hour and a half into a two hour flight, one of our flight attendants asked to come up front to discuss something. This piqued our interest because in the years since 9/11, the procedures used to visit the cockpit have become so onerous that almost nobody does so anymore. It used to be the opposite but that's a topic for another day.

The flight attendant came up and said that a passenger had spotted and was concerned about a liquid he thought he saw on the top of the wing. She then mentioned that yes, in the reflection of the sun off the paint, there did seem to be an area that might've been wet, but it was hard to tell.

We immediately begin to think that we had another nervous flyer ready to believe that death was imminent due to the wing falling off or some other disaster. This happens enough that most pilots have at some point had to deal with excitable passengers claiming to have seen something. This, I'll admit, was my first thought. But I'll also admit that I did take a look at both the fuel and hydraulic quantity gauges. All was in order, so if there was any leak, it was a small one.

There's an old joke about the F-4 fighter. A pilot was asked what he'd do if he found a leaking fluid on his walk-around inspection. He answers "nothing". When asked why, he explains that if it isn't leaking, then that means there's nothing onboard to leak. The point is that all airplanes are plumbing nightmares and to some extent they all leak.

A trip into any wheel well on any airliner will display a dirty and greasy area. It's just like looking under the hood of your car. That grime you see comes from some fluid whether it's oil, coolant, steering or brake fluid that oozed out from somewhere. Airplanes are no different. That's not to say that leaks are acceptable, they aren't. But usually, leaks are from loose fittings that need tightening and present no real problem. Looking for leaks is one of the primary reasons for doing walk-around inspections in the first place.

Big leaks are of course bad because not only will the leaking fluid not be available to do it's intended job, it might cause trouble as it goes some place it is not supposed to go. Fuel is the most obvious example of this, but hydraulic fluid can cause trouble by going where it shouldn't as well. Skydrol, the hydraulic fluid used by most airlines causes burns to unprotected skin, while the stuff the military used when I was there was explosive when it became aerosolized from a high pressure leak.

Yea, you'd think the military would move away from explosive hydraulic fluids being that their airplanes are targets and all, but whatever.

Anyway, I was simultaneously thinking about what fluid might be on top of my wing while also trying to think of some plausible explanation for our flight attendant to tell our worried passenger. If it had been winter, the best explanation would have been that it was deicing fluid. Deicing fluid is designed to stick to the wing surface and gives a wet appearance. As it was summer, all I could think of was that some fitting in the actuators for the leading edge flaps may have been leaking with the fluid running back across the top of the wing.

We ended up assuming that it was most likely that if anything. At this point I kept an eye on the gauges and called ahead to have a mechanic meet the airplane. Was I concerned about this? Minimally, and here's why. First, all my pressures and quantities were perfectly normal. Secondly, should the system have failed for whatever reason, there were still multiple ways to extend the leading edge flaps or even to land without them.

Lastly of course was the possibility that our worried passenger saw nothing but a reflection. Trust me, I've heard worse.

After landing, we had a mechanic take a look. As it turned out, the leak wasn't hydraulic fluid as we'd suspected but was in fact fuel. The fuel line coming out of the wing snakes through the top of the engine strut down to the fuel control unit. A fitting in this line was damp.

Was this a big deal? Not really. That area, as do all areas with fluid lines, has a drain which collects any leaking fluids and vents them overboard safely. A tiny bit had made its way out from under the panel onto the top of the wing which our eagle eyed customer saw. Still, in over 25 years I'd never seen nor heard of a fuel leak on the top of the wing. Most engine fuel leaks drain out of the bottom of the engine cowling.

The airplane was taken out of service due to replacement O-rings not being available at that station, and we got to deadhead to our final destination for the overnight. Just another day on the job.

Would I have done anything differently? No. The actions we took were appropriate, but I was reminded that especially in aviation as in many things, the most obvious conclusion may not always be the correct one. Things are not always what they seem.